The Edinburgh Blues Club (EBC) is a Social Enterprise established to create a specialised environment for the support of a monthly blues event in the fabulous Voodoo Rooms, Edinburgh to guarantee that the people of Edinburgh city do not miss out on class touring blues acts.  The EBC is maintained on a membership subscription basis, where members pay £10 per month in return for access to all EBC events and newsletter.  Tickets are also available to the general public via Ticketweb, Tickets Scotland and Ripping Records. This night was held to commemorate the first anniversary of the club to a majority mature audience.

First up is Dave Arcari, who bursts on stage with great energy, jumping about, exciting the stunned audience. Sporting a mystical, billy goats, silver tipped beard he roars through the set with hard-hitting gravel-laden vocal.  This man has totally instantaneous energy, there’s no doubt about that.  The guitarist and songwriter blues sounds incorporates a mix of trash country, punk and rockabilly come pre-war Delta blues.  Arcari has showcased eight internationally-acclaimed solo CD releases and has an impressive tour dairy to match.

As well as showcasing Arcari’s trademark National steel guitars, he constantly changes instruments from banjo to regular guitar and cigar box, which maintains a hive of excitement.  His legs stand wide as he strums on any instrument to hand, skipping from rocky to mellow chilled blues – all good feet tapping stuff.  He claims to be ‘loosely a blues guy, but likes to mix things up a little’. Arcari explains the BBC invited him to record a Johnny Cash song (even though he confesses he ‘sounds fuck all like Johnny Cash’ – he chose ‘Blue Train’ which has been in his set ever since.  Interspersing each song with his no messin’ tales and honest banter, he warns the audience that he expects a mosh pit at the end of the night when he was returns for the ‘graveyard shift’.

Next act up is Mike Whellans who confesses he won’t be ‘jumping and jiving about’ like Arcari but he makes up with the fact he is an astonishing guitar picker, equally at home on 6, 12 string or electric guitars, base drum, high top and is an amazing harmonica player and of which he plays all at once.  One of the few remaining one-man blues band in Scotland, Whellans performs to a regular sell out at the Fringe and is a popular draw at blues and folk clubs within Scotland, Scandinavia and beyond. Born in the Borders at the end of World War Two, Mike commenced his musical life in the late 1950s playing his father’s drum kit, and by the age of 14 was playing in local dance bands.

Whellans beholds boundless energy commencing on the guitar and harmonica; he demonstrates brilliant rhythm and melody.  The old male leather clad Blues fans at the bar come alive at the bar tapping their feet to Whellans harmonica solo.  This man, with this short stature and black cap has big lungs for such a wee guy!  With his ‘colourful’ tales between songs he regales about his regulars bringing their wives to his gigs, as they could not believe a man could multi-task!  Another past member of the audience once accused Whellans having a tape recorder up his keester! Whellans is clearly a talented man who is able to layer multiple instruments creating a full band piece.  He takes a mellow love song and changes to tempo, turning it into a thigh-slapping tune.  Just when you think you have seen it all, Whellans astounds the intimate Voodoo Room audience with some of the most impressive mouth percussion beat box.  Is there no end to this mans talent? 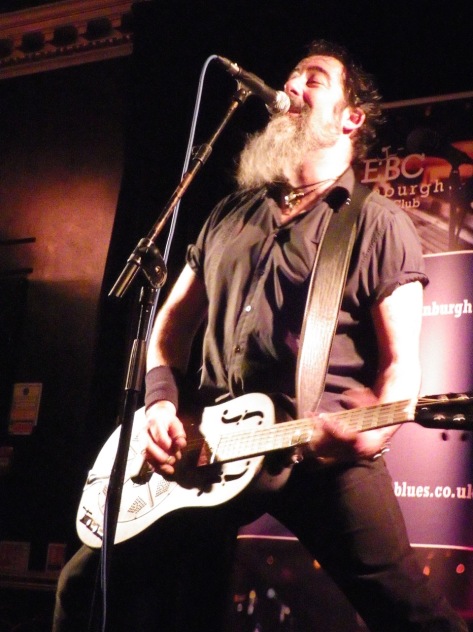 Putting any young un beat boxers to shame, he creates unimaginable noises, from a helicopter to a steam train, then interjected with the percussion with harmonica highlights – superbly animates with it. The speed and power with his lungs is outstanding.  He cheekily encourages to audience to experiment with his beat box vocals experiments on your female partner when at home.  Despite his mature age and loosing his plectrum at one point (he was sitting on it) he can play some mean blues!  He even gets the audience involved with some ‘shim shank shimmy’ chorus.  Now living in Lauder, he plays at an Italian bar, I find it very hard to believe this, he is clearly is destined for better things.

Dave Arcari returns with his impressive manicured sculpted beard for his second set. I noticed as the night went on Arcari’s wide legged stance seemed to get lower and lower, an impressive accomplishment by any yogi’s standard!  Some people call Arcari the devil of blues, accepting no regulations of typical blues and just going on his own style!  The energy Arcari possesses is remarkable, the man doesn’t stand still and his facial expressions and laughter are scarily haunting.  The night ends on a duo with Arcari and Whellans, a first for this pair, with Whellan on the harmonica and floor box and Arcari singing, they play like they’ve been in duos for eternity. Holding the stage as their own. 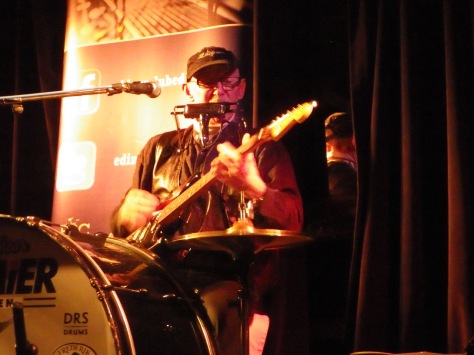 I urge you to make your way down to EBC asap because there is no end to the talent here and if it can turn this ‘non-blues-fan’ to stomping and shimmy-ing in her seat, then I bid you to go along and give it a go!