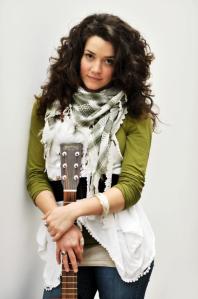 An enjoyable evening of well written, effortlessly performed songs by two talented musicians. Polly Bartrett started the performance with a selection of mostly melancholy songs (which she pointed out and joked about) but with her beautiful voice made the experience not sad but relaxing. Her most notable song was Anachie Gordon a beautiful Celtic ditty which captivated the audience.

Ruarri Joseph gave an impressive performance playing many songs spanning his musical career. He demonstrated his obvious talent in a varied range of songs including the upbeat “Patience”, (which had been requested by a fan) to the thoughtful “Brother” and the rail against the fickleness of the music industry “Faithless Few”. He also rocked the harmonica! Throughout the evening both artists interacted with the audience and there was a very positive vibe through the night.

Would recommend going to see Ruarri and Polly live, they are very talented musicians. They are next playing for the good people of Aviemore at the Old Bridge Inn on Wednesday 8th of April at 8.30 pm.