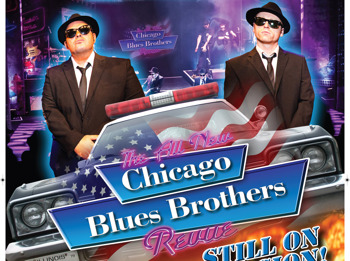 Welcomed on stage by the reverend ‘Cleophus James’ (James Brown’s character in the movie), Chris Hindle as Joilet (Jake) Blues and Gareth Davey as Elwood Blues, identically dressed in black suits and ties, with pork-pie hats, white socks and sunglasses, started things off with ‘The Boys Are Back In Town’.  The audience greeted the Blues Brothers with enthusiasm.  The stage backdrop showed a Chicago cityscape.  Supporting the brothers was an immersive 7-piece live band and two backing singers in sparkly LBDs.

Although the boys made light of it, the show suffered a bit due to the fact that Elwood was from Leeds and Jake from Bradford with both slipping from poor American to Yorkshire accents throughout the show. ‘Hard to Handle’ proved to be well named as it was talked through, in a Bradford accent, rather than sung with any conviction. The show started a little sluggishly but thankfully it picked up as the night progressed.

The true Blues Brothers were known for their impeccably synchronised dance moves; unfortunately the tribute act just could not quite pull it off.  The dancing was mediocre and unpolished including the efforts by the three lads in the horn section. Between songs the duos banter created some laughs, such as when singing ‘Raw Hide’ the brothers played piggy back with amusing consequences. The patter however sometimes fell into Bultins red coat territory, red coats in black suits, I suppose? The brothers reenacted parts from the film, although at one point I think even the lighting technician fell asleep, as the band were plunged into darkness in one of the comedy fillers!  Jake quickly gained control of the situation and made it into a joke about his weight, claiming “I wouldn’t mind but how can you miss me”?!! At one point in the show Jake turned to the audience complaining that all women were trouble. Cue one of the backing singers stepping forward to confront Jake with ‘Think’ by Aretha Franklin, marking the moment where the energy lifted!  Subsequently Elwood appeared dressed in a white suit to sing ‘Minnie The Moocher’, a number guaranteed to spark audience participation. Elwood proved to have the better voice of the two and played a decent harmonica. Jake’s vocals often fell short of giving the material the rough and ready justice it required, but he held the key and with an eager audience to sing along, the songs were on the whole enjoyable. Largely helped by the excellent backing band. As the film quotes “We had a band powerful enough to turn goat piss into gasoline.”

After the interval the band returned and the backing singers exhibited red glittery dresses. Clearly the intermission drinks break helped relax a few of the audience, as we witnessed some standing up dancing and singing in their element during most of the second half.  Many die-hard fans had gone to the effort of wearing pork-pie hats, sunglasses and suits accompanied with inflatable saxophones!  ‘Shake Your Tail Feather’ got almost the entire audience up and dancing doing the monkey and mash potato!  The night ended on the feel good song ‘Your Love Keeps Lighting Me Higher’.  “What a night… what a party… what a show!”