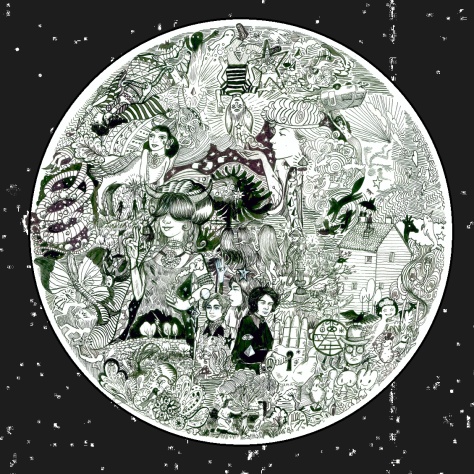 A couple of days back, I opened my emails & found this bandcamp link to a certain band called The Suns of Albert, & their first album, Waking up in Eden. Little did I realise I would be opening a Raiders of the Lost Ark style casket full of psychedelic sound phantoms that are still swirling about my inner ears as I type.

In the grand tradition of the vinyl experience, the album is divided into two 20-odd minute sides, whose tunes segue effortlessly into one other. The first side begins with bird song, which lulls the listener into a heady state of mind before being dramatically shocked into life by a spine-chilling opening chord sequence played out on a rasping acoustic guitar. Some fairy strings come in next to set the mood, then the electric guitars, before the beautiful harmonies attained by The Suns of Albert leap leopard-like to the fore.

We have now entered the full band sound – a mish-mash-mesh of inspirations and ideas, all served up with excellent control & musicianship. The guys have eclectic tastes, and throughout side one I was sure I could make out audio-nods to the Incredible String Band, Kasabian ninja-vocals, Iggy Pop, Leonard Cohen, Pink Floyd, the axemanship of Bernard Butler during his halycon Suede days, while all the way through the album an appreciation of the Beatles harmony-work is clearly evident. Underneath it all the drums are sublimely efficient, full of creativity, driving us along the sonic-rails that that listening to Waking up in Eden involves.

Lyrically, the songs are top-notch; imagine what Coleridge would have done with a recording studio & a few bottles of laudanum. We hear such gems as;

*
From a caravan we rock
Into a dusky beatific reverie….

*
Syncopated footsteps… Synchronising heartbeats….
Marching with a message to carry it down the road

This album seems to reflect the ebbs and flows of the psychedelic experience, an oral-odyssey of ups and downs, of twinkling pianos, warped loudspeakers, swirling Hammonds & haunting violins. The journey undertaken by the listener is both geographical and, as I have already stated, a time-traveling soiree through the sonic soundscapes of yore. In between the lyrical sections, The Suns jam the tunes out really well with an accomplished brand of guitar music that although sounding familiar, is pretty unique in its overall effect.

The first half finishes beautifully, a spacey twangling guitar flourishing to fade, and I eagerly put on side two to see what else The Suns had up their sleeve. As I did so, I was like, ‘why don’t people do this anymore; rock operas, pop operas, whatever you’d call them are so friggin’ cool!’ The second half continues where the first left off, that is with a pulsing memory of the great Stones track, Play With Fire, called ‘I Know How it Feels‘,’before a master of ceremonies invites us all to, Sergeant Peppers-like, ‘look through the soul window and gaze upon the creature.‘ Next up is a baggy classic, reminiscent of the Happy Mondays at their best, full of well-polished space effects and extravagant guitar sounds. As we continue through the second side, we get the feeling that all the albums’ classics were saved for the resolution of the story, where euphoric strings sit side-by-side with infectious choruses. One of these tunes – Are You Kool? (a pretty cool track) inspired the lads to shoot the following video.

Another great moment of side two is Law Of The Land – a Roy Harper inspired beautiful liquid jam, with vocals reminiscent of the solo work of John Squire. We then have a real foot-stomper in the vein of Cast’s Sandstorm, which has a rather obtuse main lyric of; ‘Welcome to the Vegetable Alphabet.’ As we approach the end of album the boys break out into some lucid clear jamming , before reaching the epic finish of ‘Shalalalalalalas.‘

The Suns of Albert are a mysterious bunch. They definitely live in the Edinburgh area, but refuse to give out their real names. Instead, Manuel Enok (Guitars, percussion and voice), Nathan Toulouse (Drums, keyboards and voice) and Riff Ghrys Jones (Bass, wind and voice) are the avatars under which The Suns of Albert operate. What they do in the real world, I do not know, but does it really matter? Waking up in Eden is a brilliant piece of escapism, a highly poetic project and lyrical feast on which to surf the silver soundscape; a classic piece of musicianship, which seemed to me to be avant-garde, old fashioned and futuristic all at once. It feels like the musical spheres have come full circle and at £7.50 the download is a steal. It is also possible to download individual tracks at 75p each.

I pressed play and was expecting Adam to find me and give me a tour of Eden, but instead The Suns of Albert found me hitch-hiking within the middle of my own little lost galaxy, and flew me round the musical universe of all that has been revolutionary and passionate. We saw stars such as Led Zepplin, Jimi Hendrix, The Beatles, Louis Armstrong style brass, Zappa was glimpsed in there and for more modern ears, Kasabian will reach out to you. It was like being taken by the hand and flown through Apocalypse Now on a magic carpet while the co-pilot gentle whistled through a shenai until we reached Strawberry Fields again! A modern reassurance that the revolution is still on – excellent!

One thought on “The Suns of Albert : Waking up in Eden”