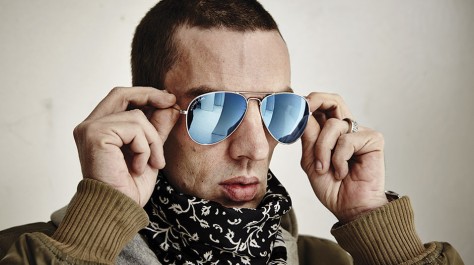 With new album ‘These People’ riding high at number 2 in the UK midweek charts, former Verve frontman and maverick Richard Ashcroft strode out confidently to a sold-out Glasgow O2 Academy audience. It had been around five years since The Drugs Don’t Work star last appeared upon this stage; gone were the shaggy locks, the northern menacing leer which coined him the cruel nickname of ‘Mad Richard’ by the media, and in its place were a blue-suit, black polo-jumper, an army crewcut, and shades which were available to buy in the venue toilets. Regardless of such fashion faux pas, it was an electric atmosphere inside the congested arena where one and all were simply delighted to see a much-missed icon back on Glaswegian turf.

New album opener “Out Of My Body” kept things simple at the start, leading into first single “This Is How It Feels”. Both tracks offered a real punch, teeming with Phil Spector’s Wall of Sound smashing into the ruby-lit faces in the lower section. The instrumentation provided by Steve Wyreman and Adam Phillips on guitars, Steve Sidelnyk on drums, Damon Minchella on bass, and Anthony Gorry on keyboards appears to be a masterstroke as old favourites such as “Science of Silence” and New York” provided a robust backing, whilst Ashcroft’s decision to reunite with ‘Urban Hymns’ strings arranger Wil Malone elevated the music so that even those sat in the top tier back row were treated to its full capacity. The latter track from the ‘Alone With Everybody’ album in 2000 delved back further still with a drum and bass guitar-led march which clearly nodded towards The Doors ‘Five In One’.

Ashcroft’s often phlegmatic opinion of his former band has grated on fans in the past, intermittently appearing nothing more than cold, but as a live prospect he radiates nothing but pure warmth and love. From where I stood, the quixotic and timeless qualities of “Sonnet” was only slightly marred by two boisterous and highly out-of-tune ladies in the audience who were clearly suffering from antiperspirant and anger management issues, as Ashcroft led the audience down memory lane; ladettes and all. The fists remained pumping between the main attraction and audience on “Music Is Power”, before things slowed down into a more mellow sound during “Break The Night With Colour” and new track “Ain’t The Future So Bright”.

At different points throughout the evening, the star-turn insisted how good it was to be back on stage and in front of his fans, patting his heart, holding his guitar above his head, or simply crying out “I feel the love, it’s good to be back”. The feeling was mutual as the audience reacted to Verve classic “Lucky Man”, dedicated to ‘anyone lost along the way’, singing back line for line to their hero. One punter at the back continued to howl “HIS-TO-RYYY” the duration of the gig, but most seemed appeased by the song-choices that had been made. The enormous queue to the gents toilets (space for six toilets despite thousands in attendance – sort that out, O2 Academy!) watched nervously on, scared that they would miss the many classics which Ashcroft could have plucked from.

Returning for a five-song encore which included “The Drugs Don’t Work” and “Song For The Lovers”, Ashcroft shook shades from face and surprised the audience with his 1998 collaboration with UNKLE on “Lonely Souls”. Militant drums and flashing strobes turned this into an exceptional live track on what was, in all fairness, an easily forgotten generic album track. The surprises continued with how alarmingly good new single “Hold On” is live – a testament to the tight-knit group behind Ashcroft’s crooning, as the audience exploded into throwing beer cups, dancing, and arms stretching upwards to its uplifting vibes. Smile plastered across his face, Ashcroft exclaimed “Number 2 in the charts after five years of nothing” before castigating artists who live on their army of Instagram followers. It was clear that the last handful of years hadn’t been easy on the man from Wigan, and perhaps unsurprisingly his final gift was to play “Bittersweet Symphony” to a rapturous audience willing him on to keep taking things to a higher level. I confess that at this point, my note-taking has suffered and I became one of those people who need to film parts of the gig – perhaps it was just a little souvenir from a special evening which I wanted to keep. Sex and violence, melody and silence – Ashcroft brought it all during his 17-song set over two hours. This was a fantastic return to form and one can only hope that one of the UK’s finest singer-songwriters doesn’t fade into the shade of bands like Coldplay for long again – we need him around, just as much as he needs ‘these people’. All aboard!