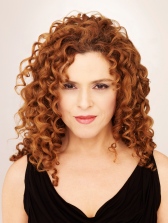 Bernadette Peters is the sort of actress whose name you may not know but whose face and speaking voice are instantly recognisable from film or TV- even if you are not a big fan of musical theatre you are sure to recognise her from her role as the con-artist who pretends to be the lead character’s mother in the 1982 film ‘Annie’, or as the shy teacher who fallls for Steve Martin in ‘Pennies from heaven’, 1981. In the course of her varied annd illlustrious career she has won many awards, including 3 Tonys, and has many feathers in her cap, including stage work, films, TV, worked a recording artist and has a big heart, to boot, having raised a lot of money for AIDS and animal charities over the years.

There is something unique and likeable about her face and character, she has great stage presence and had the audience eating out of her hands in between songs, with her sharp, funny comments. She is a seasoned performer and her physical confidence is undeniable. In fact, when I researched her age I almost fell off my chair and had to check 3 different websites to make sure it wasn’t a mistake- she has the spectacular physique of a woman half her age and the voice and energy to match. 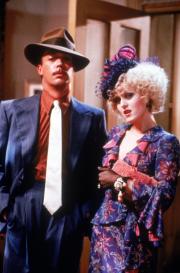 In this show she performed solo, with an 11 piece backing band who played every tune beautifully, consisting of 4 string instruments (2 violins played by Jonathan Hill & Calina De La Mare and a viola and cello, played by Polly Wiltshire and Nick Cooper, respectively), as well as the timeless French Horn (Marcus Bates), with both James Mainwaring & Graeme Blevins playing sax, clarinet and flute and David Thomas on the oboe. The band leader, Marvin Laird, is a highly respected, multi-award winning musical director annd conductor who has worked with the likes of Diana ross, Dusty Springfield and the like, scored the music for TV shows such as ‘Love boat’ and ‘Quincy’ and he and BP have had one of the longest working relationships in showbiz, spanning more than 4 decades. Under his leadership the band played seamless, flawless music- the sound was clear as a bell and the perfect complement to Peters’ husky, sexy tones. 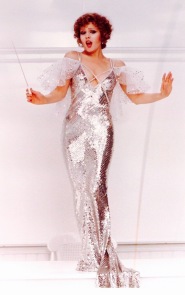 Some absolute classics, including ‘Fever’, and Disney’s ‘When you wish upon a star’ were belted out with flair and gusto, while other hits were given the sensitive treatment more suited to their content, such as ‘Losing my mind’ and ‘Send in the clowns’. The show ‘s primary focus was on Sondheim material and many of the other songs were not as well known as we expected yet, judging by much of the audience’s reactions this was no impediment to their enjoyment since many of them were clearly regular theatre goers and a large part was clearly made up of Radio 2 listeners of the Elaine Page show who knew their A-Z of musical theatre.

However, this is obviously not the case for anyone expecting more mainstream hits. The rather specific nature of the show was also its Achilles’ Heel- several of the songs sounded rather similar and the sort of song that is, often, superfluous in a musical where speech would have done just as well- the content definitely could have been a little more appealing to a mainstream audience but her performances were fantastic nonetheless. To sum up, BP is a wonderful performer as were the musical director and band, the show is well produced by Neil Eckersley and all the crew but unless you are a die-hard fan of musical theatre, the sort who knows and loves every song, this show is not for you and should be left to the aficionados…but if you are that aficionado then you will love it.