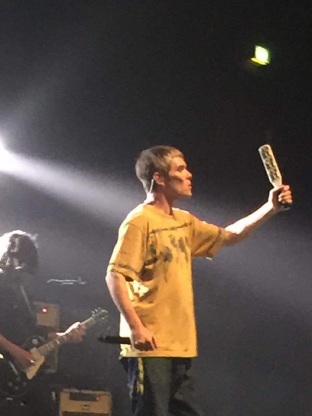 This is a genuine old skool event that very few can do:  buying tickets at the box office, queues, lemons, the sense of anticipation in the city; we’ve yet to see if the Roses will offer anything new, but they are an event: bands/artists come and go, but only The Stone Roses in 2016 can do this. The weather in Carlisle is balmy–a rare condition here–and the people are outside the bars soaking it up. A walk through Hardwick Circus takes us to the Sands Centre a theatre/sports hall and there are lemons on the roof. 8.45, the singing starts in the Sands’ bar; just after 9 pm The Stone Roses arrive and it feels like the best band on the planet is playing in your school gym; somehow this feels apt. 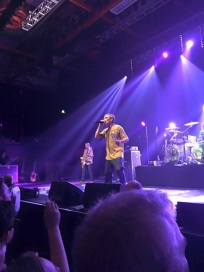 Ian Brown asks, “Have you got your dancing shoes on?” And we’re off: no surprises, it is Adored. The gym goes mad. And never stops. One young lad in a Leicester shirt is on his mate’s shoulders and higher than everyone else, conducting like we’re at The Moscow State Orchestra. First impressions: the band sound fabulous; just beautiful. John’s looking brilliant, a bit like a 1970s George Harrison, circa All Things Must Pass. There were mutterings that Ian’s singing was a little inconsistent the night before, not here though, he’s on the sweet spot tonight, not that it matters though as the crowd sing every word of every song as we sweep through Elephant Stone, Sally Cinnamon, Mersey Paradise, Bye  Bye Badman and Begging You. Not only the lyrics either, at some points they also sing the iconic guitar parts. 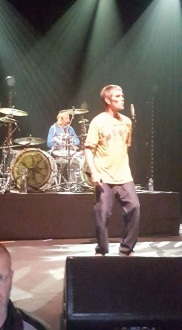 There’s a brief pause, a flag of Saint George has been hoisted in the middle of the pit; Brown gestures for it, takes it and throws it away with the Cantonaesque line: “People who fly flags don’t deserve to.”  I notice Reni give Ian a little smile that says edgy Ian, and then they segue into a crowd singalong of Elizabeth My Dear: absolutely right, this isn’t the last night of the proms. Then we’re into the Roses’ voodoo groove: Waterfall, Don’t Stop, Fools Gold. 25 minutes of bliss as the groove mutates into endless forms most beautiful:  Shards of guitar beauty all over drum & bass variations that would have made Paganini proud.

“Not bad for a Wednesday night, aye?” asks Ian. Then we’re into the finale: the new single All for One is transformed by a denser live sound more reminiscent of their past; the audience love it. Then we get more Second Coming material, Love Spreads & Breaking into Heaven: at this point an anthropologist might think they’ve discovered some new form of pagan ritual. The finish is She Bangs the Drums, This is the One and Resurrection. I’ll say no more. No encores; no more new material, and we walk out into the night to the sounds of The Supremes accurately describing our condition:  Stoned Love. This is the Stone Roses at Carlisle. 2016.