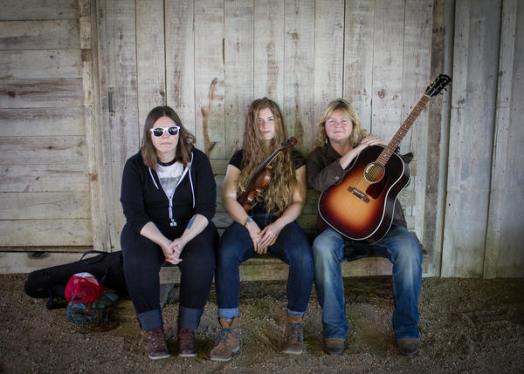 Going to see Americn trad-band Kiya Heartwood & Tejas is what the Edinburgh fringe is all about. My god-daughter’s band were up from Lancashire at the Fringe, & Kiya very kindly gave us all tickets to witness her, I can only see, musical genius at work. What a lovely story-teller Kiya is, backed up by Janna on electric guitar & the highly accomplished raven-haired Anna on fiddle, they transported us across the oceans to the heart & soul of American music, forged in many a fire-lit mountain cabin over the centuries.

Kiya’s songwriting ranges over topics which strike something in her poet’s soul – a stike in 1900 in Pennsylvania, the slaughter of 1400 Native American horses, the rush & flush of Flamenco music, its all there as she crafts her beautiful, meaningful songs which all possess the kick of an angry mule. Of these, there was a wonder in her Burial Ground, which we were all invited to sing-a-long to – & we did. Her accomplice, Janna, also shared the stage with a well-wrought number, concerning her youthful angst at growing up in the New Mexico… ‘Im trying not to be Midwestern,’ she tells us, ‘but I keep it all inside & it tends to fester.‘

Their last number was a rip-roaring rendition of Drowsy Maggie, & one notices the Celtic roots in all her work. This is why she loves Scotland so much, I guess, & returns to perform to her much-appreciative audience. It was a special hour or so with the ladies & the Mumble wishes them well as they play one more gig at St Brides Acoustic Centre today, before training it & ferrying it all the way to Ventnor on the Isle of White – a long journey, but being American they’d be used to it.