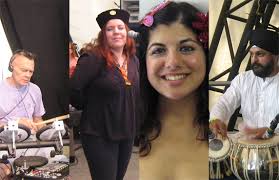 The Oran Mor venue in the basement of a converted church performs well for both music and plays. It has a rather large standing space, luxury seating, a bar and somewhere to lean on. The Indian music I heard tonight sprang from four artists sat cross-legged in a row. Their sonic creation was pure Indian fusion that would work well for meditation of one kind or another. The singer’s voice floated effortlessly, the result of years of intense training and practice. Her lyrics were all but unknown to me, but I did find myself musing about love and loss.

The stage was then prepared in darkness for the main act, the Suns of Arqa, which was large enough to give these four musicians plenty of space between them. As  the performance began to flow, they reacted to each other calmly while the dancing singer swayed her body to the music and to the lyrics. There was a darker brooding side obvious from the start, but this was not a prerequisite for the whole show at large.

What became evident quickly was how well the performers gelled and emphasised more the space and room between themselves. This connection seems to thrive through the sheer length of experience of a band who have been playing for decades, having formed in the mid-seventies. Their remarkable mix of different cultures has seen them work as intermediaries for the whole fusion scene, so important in today’s musical climate and is well on the way to becoming a world wide phenomenon. 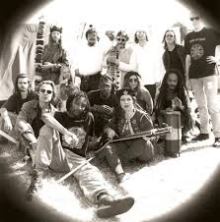 As the show progressed, the band’s experience was brought forth more and more giving us greater and greater insight as the Connection gig progressed. Those of the audience standing were swaying, and were invited to join in singing. There was a serious side of the music and lyrics that imbued a greater respect from the audience viewpoint. And a ceremonial aspect both hinted at and demanded upon by these aspects of the shows great organisation and experimentation within the freeform of jazzy/ folk like swinging to a general sense of drum and bass music.

The band, with some charisma changed instruments, introducing a feeling of good quality and professionalism. Instruments ranged from bongos to age old flutes and bagpipes, while the change of singers gave another fresh aspect because the voices were completely different. The sense and mood of the performance remained constant, however, full of darker tones of which I would have liked to have read the lyrics; one to see if my interpretation were correct and two to see just how well they would enhance the general quality of the show and personal dedication of the band (on and off stage) towards the goal they had of bringing world music to the stage using both very old and very modern equipment.

It was a pleasant evening, relaxed and full of charm. A perfect scene of people quietly paying attention to the stage enjoying a drink from the bar. The music didn’t demand anything more than wanting to be heard and listened to. With clever timing, musicianship and performance.