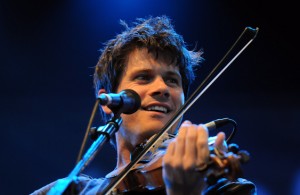 Last night provided my fizzingly excited being with one of those protracted moments which only an international music jamboree may provide. Celtic Connections invites the best of the planet’s world music into its well-lit, bustling cloisters, & it was with great delight that I, for the first time, heard Seth Lakeman play. Ten years ago, while wintering in Sicily, his album ‘Freedom Fields’ had been a constant companion, its blend of civil war ballads & sea-shanties connecting with something primeval in my British soul. The best thing to come out of Cornwall since the pastie, his songwriting is stunning, & when tangled up with brilliant musicianship & a voice through which an electric current runs with violent sincerities – a legend is truly born. People will be singing Lakeman’s songs for centuries to come, believe me, & last night I was privileged to witness him sing them on his own, stripped of his band with only a viola & guitars… plus the occasional programmed bass-drum-beat which provided a pulsing audio-stomp to proceedings.

Lakeman’s warm-up were a couple of American trad-singers, Cathy Fink & Marcy Marxer, who also happen to be wife & wife. Playing with, & loving each other, since the early 80s, they bubbled along like happy schoolgirls through an intelligent & bouyant set. The musical maestro was the motherly multi-instrumentalist Marcy Marxer, whose spell-binding fingerwork on the rarely used cello-banjo kicked off proceedings with ‘Chilly Winds.’ The main vocalist is Cathy Fink, who is no mean musican herself, & together they blend like happily married musicians should. It had been almost three decades since they’d been in Glasgow – playing at the Star Folk Club – but it felt as if they had never left, for their was an friendly easiness to their performance & crowd-cuddling antics which made them feel like friends.

The highlight for me was when they combined their ukuleles on an instrumental number called 12 Street Rag. Just like the young De Quincey had made a pilgrimage to the West Country to meet Wordsworth & Coleridge, so a young Macy caught a bus to New York & began ringing up all the Roy Clark’s in the phone book until she found the home of Ukulele master, Roy Clark. A few minutes later she was in his kitchen being taught the Rag, & as it reached my ears I felt the true lazar-beams of international cultural distillation. Also feeling in was Mr Lakeman, who was watching the performance with calm appreciation at the door at the back stood by the bouncer.

On came Mr lakeman like the God Pan with his pipes, one of the Lakeman Brothers & a part of the British folk staple for two decades – & hes still only a tender 39. His solo set flew by,  a flurry of violas & guitars, of broadside ballads & disaster laments, all garnished by that curious Cornish warble of his. Lakeman enjoyed tonight, you could tell, for it gave him the chance to revisit songs skimmed over by his band over the past decade – & he delivered them perfectly. Of course as a fan of Freedom Fields, I was tearily delighted  to hear The White Hare & The Colliers, but it was other songs which I’d never heard before which I enjoyed the most. Among these were a rousing number about the Tolpuddle Martyrs & another on the Penlee lifeboat disaster, showing how Lakeman is something of a ‘national bard’ of the  West Country. The musicianship of one of his rare offerings was especially quality – an astonishingly seductive ballad about loveloss written 15 years ago – his harmonic pick-slapping style was pure joy to experience. Yes, I shall be seeing Mr Lakeman again, & regret not latching on to his live performances sooner. I shall be taking the wife next time! 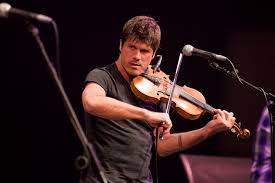