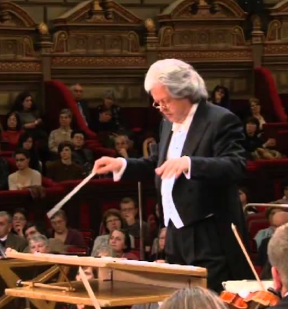 I have probably said this before, but for some time we have been used to hearing classical music reproduced on and moderated by electronic media, and watched orchestras at work courtesy of video cameras. A performance in a concert hall, by comparison, is a totally acoustic experience. It depends very much on the properties of the particular hall, and of course there is no scope for engineering the sound to perfection, eliminating extraneous noise, or repeating passages if a mistake is made. In actually attending an orchestral concert one must accept these rough edges and that there is no way to smooth them. I will mention a couple from this performance (the over-strident timbre of the triangle and the bad note sounded during ‘Bydlo’) and move on. Also in a live concert one has to accept the interpretation offered by the conductor; if something is taken at a slower tempo than you like or are used to (as was, to my taste, the ‘Dance of the little swans’ from Swan Lake), there is no opportunity to pick a different version – this is not YouTube!

Apart from recorded audio performances, the other feature of a venue that competes with attending a concert is, as I mentioned, the televised production that allows you to see the orchestra at work, thanks to well-placed cameras. I love Perth Concert Hall and have attended not only orchestral concerts there, but rock gigs, jazz, recitals, and talks. It’s a great all-purpose venue, but there are problems when it features an orchestra. These problems are the flat stage and the gentle rake of the removable seating, which means that the bulk of the stalls have a view of the front rank of first violins, the front rank of cellos, and very little else. Add a grand piano front-and-centre and that’s that! The lesson is to rely on, and get as much as you can from, the good acoustics here – just enjoy being in the same ‘real space’ as an orchestra.

The Moscow Philharmonic Orchestra is a very formal, very disciplined outfit. This can be seen from the way they enter the stage to take their seats, all the way through the performance, to their leaving the stage. If at first there was a kind of coolness to their precision, which may be one reason why the imperfections I mentioned stood out, by the time they had got to their second encore – the ‘Pas de deux’ from Nutcracker – they had totally found their groove, they had warmed to the audience and the audience had warmed to them. Their performance of very popular pieces with a distinct Russian flavour, with French dressing, were directed by a conductor who had been a child prodigy and has since then been heaped with honours, Moldovan-born Yuri Botnari. He used the orchestra’s discipline to good effect, bracketing the main performance of the evening with material which, albeit ‘easy winners’, showed what they could do. 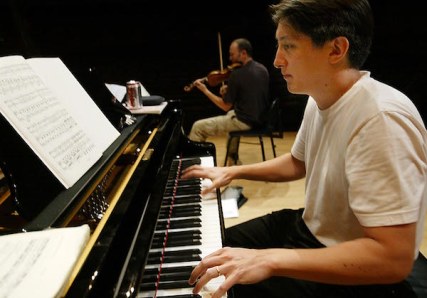 The other former child prodigy present was concert pianist Freddy Kempf. The Rachmaninoff concerto that he tackled is one of considerable technical difficulty, and yet he launched himself into it with great energy. I very seldom attend a performance where my attention is held throughout, but this was one. Kempf’s handling of the solo passages was enthralling, there is no other word for it, and the balance between orchestra and soloist was almost perfect. The slight swamping of the piano in the coda of the concerto’s final movement was just one of the rough acoustic edges we had to deal with. My only regret is that this is a piece that Kempf has never recorded, at least not yet. If he did, I would add it to my iTunes library without hesitation.

As an overall assessment of the concert I really couldn’t fault the acoustics and totally accept the ‘edges’ in the performance, so I have to award five stars. For the atmosphere I’ll take one away from top marks, because the evening took a little while to warm up and, as it had cooled down during the interval, needed a second boost, so four stars. As regards performance, it would be churlish to punish a single cracked note from one member of the orchestra; Pictures at an Exhibition was a feast of synesthesia, Ravel’s orchestration conjuring up vivid mental images perhaps beyond the paintings by Viktor Hartmann that originally inspired Musorgsky, and of course the Rachmaninoff piano concerto was breathtaking, so round up four-and-a-half stars to five. That’s as near to a royal flush as a hand can hold. The concert programme continues on 28th May at the Usher Hall in Edinburgh and on the 30th at the National Concert Hall in Dublin.

Many thanks to Perth Concert Hall and Perth Festival of the Arts.