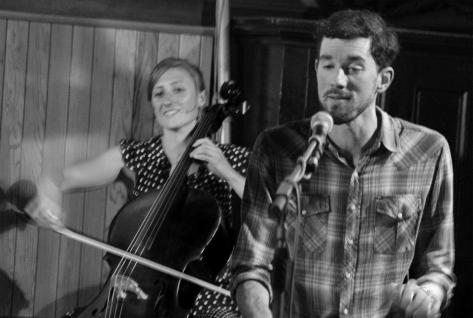 Hello Pete, so where ya from & where ya at, geographically speaking?
Hello! I grew up in a village called Kemnay, which is near Aberdeen. Though, having lived in Glasgow now for 15 years, I probably feel more Glaswegian than Aberdonian.

When did you first realise you were musical?
I’ve loved music for as long as I can remember.  Most of my earliest memories are based around music.  Christy Moore was a particular favourite when I was very small. Apparently I used to sing my own incidental music when I was playing with toys.  To be honest though, I think most people are naturally musical. It often comes down to liking it and being around it when you’re young, then it being part of your life as you get older.

Who were your earliest influences?
I think a huge influence on me personally were The Bhundu Boys.  My dad used to play them a lot when I was young, and I’ve been a fan ever since.  The exuberant, jangly pop they played has had quite a profound effect on my tastes – I can’t resist a Major key!  I can probably trace my love of The Smiths, The Beatles and many others back to Bhundu Boys tapes when I was wee. When Graeme Black and I started the State Broadcasters, our biggest influences were probably Eels, Lambchop, Clem Snide and Sparklehorse

How did forming the State Broadcasters come about?
When I was at University, I had a part time job in the library at the campus.  Graeme worked there too, and we used to chat about music sometimes.  We kept bumping into each other at gigs, and after a while he said he had some songs he was looking to collaborate on.  He played them for me, and I tried adding a few bits and pieces to them, and it all went from there. That was in 2004!

The Mumble has just got your new album, & its good, some great tracks. Where was it recorded?
Glad you like it! Thank you.  We recorded it at my old flat in Glasgow.  I was lucky enough to have a bedroom that was large enough to record everything we needed there.  All 3 State Broadcasters albums were recorded there.  It was mixed in a different, smaller bedroom after I moved house.

Each song on the album has a certain lyrical magnitude. Who is the songwriter for the group?
The songwriting is often a bit of a collaboration, but most of the lyrics are by Graeme, with the exception of ‘Braced Against The Cold’, which I wrote.  Graeme left the band during the recording process, sadly.  He’s a great songwriter – we’ll miss him. 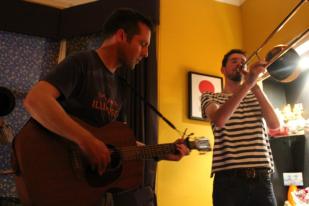 It it easy to transfer the studio sound into live performance?
Because we largely use acoustic instruments, it’s not too bad.  I love overdubs when recording though, so the sound is never quite as detailed as it is on the records.  We’d need many more members to recreate it perfectly.  Hopefully the live shows offer something a bit different though, and we spend a lot of time on arrangements. I think we get the balance about right most of the time.

You are also noted for your composition in film scores, etc. can you elaborate?
Writing for films is something I’ve wanted to do since I was quite young.  In recent years I’ve been lucky enough to get to know some talented film makers.  I did my first score for the animated short ‘Fixing Luka’, which was made by my friend Jessica Ashman.  It won a couple of BAFTAs, including a New Talent award for the score, and that has lead to a few other things.  I just completed a short score for a Western set in a Scottish high school about the lack of free sanitary products for young women.  That was a lot of fun and involved listening to a lot of Ennio Morricone, which is always a good time.

What does the rest of 2017 hold in store for Pete Macdonald & the State Broadcasters?
We’re playing some shows in the South of England between the 9th and 11th of June, and we’re supporting Pictish Trail on the 2nd of July in Glasgow. I think there’ll probably be some more tour shows later in the year too. Hopefully some in the North of England, and the Highlands and Islands.  We’re hoping to start working on some new songs over the summer too. We’re going to try to narrow the gap a bit between album releases – 4 and a half years is a bit long!