I’m trying to remember when I last, if ever, attended a bad gig at the Perth Concert Hall during Southern Fried. Ah yes, it was Los Lobos a good few years ago, who disappointed me with a lacklustre performance. That fact – one less than excellent act in the past ten years – will give you some idea of the high expectations I have of this festival. I even bought a T-shirt this year! 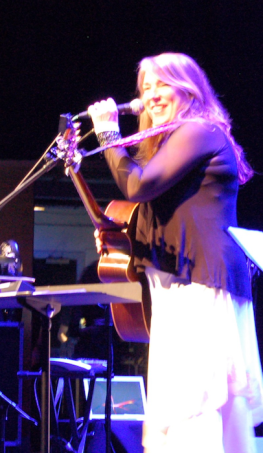 Well, tonight I went in, yet again, to a concert given by someone I hadn’t listened to in years, supported by someone I hadn’t heard before. That’s two nights in a row – Nick Lowe and Jim Lauderdale last night, Loudon and Beth tonight. The main difference between the gigs, however, was the fact that neither singer appeared alone on stage. Beth Nielsen Chapman had a musical sidekick, who sat there patiently and accompanied her on harmony vocals, bass guitar, keyboard, and percussion, as each song demanded the appropriate extra facet. That ‘sidekick’ was Ruth Trimble, who is in fact a brilliant singer-songwriter in her own right, as was demonstrated when she and Beth swapped roles for one number, which Ruth led from the grand piano.

Beth was talkative throughout, never shy of telling us the intimate details of her life that account for some of her songs. She has a voice that has not only a considerable range but also great variation in dynamics and timbre, which enables her to inject emotion into her singing. Once or twice there is a slight crack in her musical patina, but only a slight one, and not enough to merit the deduction of a whole star. She could even rock it with upbeat numbers like This Kiss or Willie Nelson’s Nothing I Can Do About It Now (which she actually wrote, so is it his or hers?). I can’t direct you to a decent YouTube clip of her in action – those that exist seem to be phone quality only – so maybe you should make a point of catching her when she’s in your town. 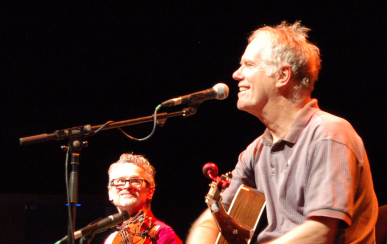 Now then, to Loudon Wainwright III. Well, I thought I was going to see Loudon Wainwright III but what I did see was ‘The Loudon Wainwright Three’. Like three grizzled eccentrics perched on a park bench, David Mansfield, Loudon, and Chaim Tannenbaum faced the audience with wry smiles – “Oh look, a YOUNG person! Your grandparents dragged you here tonight!” With that, Loudon declared ‘his’ demographic to be in the majority at the concert. That includes me; It’s about thirty years since I last/first saw Loudon, so I had no idea what he had been up to, apart from growing old. I was surprised and, I must admit, delighted by the bluegrass spin that mandolin/fiddle to his right and banjo to his left brought to his songs. Loudon shared lead vocals, often taking a verse of a song by turns, with Chaim, the latter having a voice that reminded me a little of Pete Seeger but with Pete’s urgency smoothed off. Chaim soloed with a gentle version of the 1893 version of Bates and Ward’s America The Beautiful, having mentioned in the preamble that the vast majority of Americans only know and only sing the first verse, and that they take it to be a poem of uncritical ultra-patriotism. Chaim, by the way, is Canadian.

Loudon and company didn’t mind singing other people’s songs at all, from Tom Lehrer’s The Old Dope Peddler to an Americanised version of Michael Marra’s Harmless (Hermless in the original). The evening was one of weirdness, wistful irony, and wit – “Put your hands together. No, don’t clap, just put your hands together.” Loudon established a point of reference for me by singing the song that, he claimed and I haven’t quite verified, was the first one he ever recorded – School Days. He got us involved in a sing-along with I Went To The Doctor and Dead Skunk.

A total departure from the festival’s norm of music on stage came in the middle of Loudon’s set, when he sat alone and read a passage from his forthcoming book, giving us an insight on how it feels to be visited by children from a previous marriage and cope with their fighting whilst he fails to make them scrambled eggs. Yes, it was one of those evenings. It’s remarkable just how many of his presentations had to do with failed relationships – Unhappy Anniversary and I’d Rather Be Lonely for two – or ageing – Old And Only In The Way – that nevertheless made the audience chuckle.

As this is my last visit of the weekend, thank you to the folk at Southern Fried for another great festival. I’m already looking forward to next year.