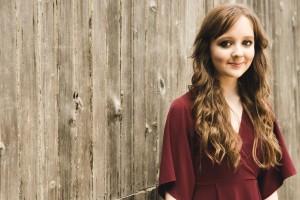 Hello Katie, so where ya from & where ya at, geographically speaking?
I’m from Airdrie, North Lanarkshire and living there at the moment however, I’ll shortly be moving to Barcelona to study! I also have connections to North Uist and Tiree.

When did you first realise you were musical?
I’ve always been musical since I could speak and especially have always loved to sing.

What instruments do you play, & which do you consider as your forte?
Well, singing is my main instrument but I have also been playing the flute since the end of Primary school and mainly in a classical style. Singing will always be my favourite.

What is it about singing in Gaelic and Scots that makes you tick?
I suppose it’s always just felt natural and I feel a great connection to the songs that I sing and an affinity with where they come from. Particularly with Gaelic, I feel a connection to my heritage and to a wealth of tradition that should always be cherished. I like to be able to play even just a small part in maintaining it.

As a songwriter, when do you know you have written a good song, what are your self-critical criteria?
I haven’t written as many songs as I would have liked in the past wee while and I feel that it is something I should do a lot more often. However, I suppose if someone says that they like it or if it has had a good reception from an audience then I’ll accept that it is worth singing. It’s difficult to know yourself when you have written a good song, but as long as I enjoy singing it then that’s half the battle.

What does Katie Macfarlane like to do when she’s not being musical?
I’m a University student studying Gaelic and Spanish and I enjoy traveling, especially to Spain where I can use my language skills. I love being with family and having time to relax on the beach during the time I spend in Uist.

Can you tell us about your Edinburgh performances : where & when & what?
It’s in the Acoustic Music Centre at the Ukrainian Community Centre (Venue No.138) on the 25th of August, with doors at 9.30pm for a 10pm start. I’ll be accompanied by the wonderful Chris Gray on piano and it will be a night of folk, traditional and self-penned songs.

How have you selected your songs for Edinburgh, & what are we to look out for?
I’ve chosen a range of my favourite songs which I particularly enjoy singing and that I feel will appeal to a wide audience. I’m excited to debut some Gaelic songs that I have learned over the summer and also to have some more well-known songs for a wee sing-a-long with the audience. There will hopefully be something for everyone!

What does the rest of 2017 hold in store for Katie Macfarlane
Well, as I’ve mentioned, I’ll be moving to Barcelona for a wee while so a lot of studying probably! I’m looking forward to recording vocals for a track on the fantastic Dougie McCance’s debut solo album very soon so look out for that. I also hope to have more gigs in the future and maybe even experience some of the folk music scene in Barcelona if I’m lucky enough!