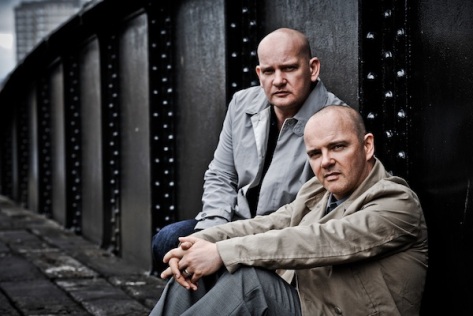 Thirty-four years in the business have witnessed Coatbridge brothers Pat and Greg Kane reach No 6 in the UK charts with 1987’s ‘Labour of Love’ (from the “Seduced and Abandoned” album), produce an eclectic, black-American influenced album in the late 90’s, appear on pop competition show ‘Hit Me Baby One More Time’ during the mid-noughties, and win themselves a legion of fans who have snapped up over two million of their albums. But like many of their contemporaries, the measure of any successful pop artist lies entirely with the release of their latest work and whether or not it resonates with the public.

‘Pocketful Of Stones’ is the band’s first album release in five years. Countering the affirmation that Hue and Cry means ‘a loud clamour or public outcry’, this record is a gentle return back into the music industry’s often cruel and cynical heartland. Pat Kane suggests that “if half a century has piled up, then you must know something by now”, and it would appear that Hue and Cry know the steady formula which has kept their fans buying their work.

Making full use of the Glasgow String Quartet, the Kane brothers tenderly open the record with nostalgic, fathering sentiments towards the past and their children. In songs such as “The Way She Flies” and “Let Her Go” (the latter includes a duet with Pat’s youngest daughter, Eleanor), there is a true rite of passage being observed in the lyrics and delivery, as the frontman steps back to let his child fly the coop. Using organ-synth sweeps, strings, and poetic lyricism, this is as unapologetically detached from the Glaswegian ‘hard man’ image as it comes.

Jazz elements and Sinatra-crooning are always prevalent in H&C’s music, and it comes as no surprise that the ‘Get Carter’-stylings of “When We’re Not Strong” emerge on the record. What works impressively is Greg’s wife Tippi on backing vocals in a borderline-Carpenters style, loosening the shackles of Pat’s solid crooning and allows songs such as “Deepest Space” and “Edge of the World” to breathe and explore corners which would have been stagnant otherwise.

While this record never threatens any degree of innovation or cutting-edge lyricism, no track is more of a standout than “Conversation” which uses synths, tambourines, clever hooks, and far more positive approach. ‘Pocketful of Stones’ is a purposefully sorrowful album, calculating life’s decisions and abrupt body swerves, but grasping tightly on to romantic and sanguine notions. Paul Towndrow’s saxophone and Tom MacNiven’s trumpet offer rest-bite from the strings with a much-needed brass element, but the largest share of this record falls at the feet of Greg Kane’s arrangements and Pat Kane’s vocal performance. Far from setting the heather alight, this record rubs two sticks together over a makeshift stone firepit, hoping to catch a spark which will flicker at varying points. It’s got the stones – but the pockets have holes.