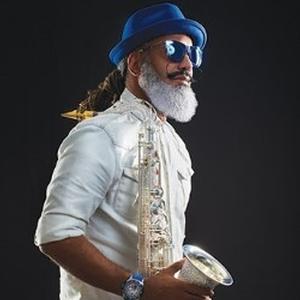 Arturo Tappin, the flamboyant jazz and reggae musician from Barbados and graduate of Berklee College of Music, is quite a legend across the Caribbean, popping up regularly at the various Caribbean music festivals from the Bahamas to Trinidad and Tobago. Not just known in the Caribbean either, having played for Presidents Clinton, Obama as well as Castro and all over the world. Best known for being a master of the saxophone, he’s performed and recorded with many reggae greats like Eddy Grant and Maxi Priest, and has played with Roberta Flack and Luther Vandross.

He comes regularly to perform in Edinburgh during the Festival, at a great little hideaway along a tiny lane off Broughton Street called the Outhouse. He has a strong Edinburgh following too, judging by the anticipation, the sell out concerts on the first weekend and no doubt, a packed room for the each of the ten consecutive nights. In just an hour’s performance, he and his band manage to smoothly transport us around the world with classic jazz from Acker Bilk, to contemporary pop, onto well-loved, energetic, cheerful and humorous Caribbean tunes. All with his own striking and imaginative twist.

The three other members of his band are also top class musicians, on drums, double bass and keyboards, and could see they were having as much fun as we were. The night began with classic jazz, in which he has a thorough grounding, and the calypso element grew stronger and stronger as the night progressed. He gave us his version of an Acker Bilk number, surprised us with a truly flavourful and unique version of the much-covered Ed Sheeran ‘Shape of You’, and then began to cross the Atlantic to bring us some well-loved Caribbean tunes, enjoyed just as much by the non-Caribbean folks in the audience. Then a delightful traditional folk song from the French Caribbean, which I know he particularly enjoys performing, ‘Ban mwen an ti bo’. Knowing some of my musician companions that night come from a French Caribbean background, he hoped they knew enough patois to sing along to this much beloved tune, now spiced up with true Tappin flavour.

Arturo’s glittering, dazzling saxophone sparkles in the light and seems only fitting for this genial showman in his dapper suits, now trademark handlebar moustache and full grey beard. He connects as well with his audiences as he does his instruments, creating a party atmosphere from the beginning that continues to build throughout the show. With quite a few people from across the Caribbean in the audience, and other enchanted listeners, it didn’t take long for everyone to get up and start to dance. As a contrast to the sax, Arturo pulled out a rather special antique clarinet that had a story behind it. It was found in pieces and then painstakingly restored by careful hands spanning continents. “Who knows what mouths this has been in?” he quipped, just before he began to play this decades-old instrument. To complete his trio of expertise, he took out a flute as glittering as his saxophone and displayed some more of his versatility. Though not as strong as his main instrument, he continued to dazzle us, especially with the rhythmical, percussive sound effects he created with his lips.

As he moved deep into the territory of classic calypso tunes, he gave us a cheeky one by famous Lord Kitchener which had those of us in the know singing along and the rest laughing at the double entendre in the lyrics, which old-time calypso is known for. Although he has such a compelling presence, it’s never just about him. It’s about what he inspires in all of us as we come together. One hour gives us a joyful, exuberant blast of the sweet Caribbean and we are left, as we sing along with him, pleading, “Don’t, don’t stop the Carnival!” One lucky person will win the prize draw of a holiday to Barbados offered by the Barbados Tourist Board, who are sponsoring the concerts. Even those of us who won’t be so fortunate to take part in Crop Over, Barbados’ annual summer festival, will be left humming these Caribbean tunes for days afterwards. Go while you can!