I had been looking forward to this gig since I bought the tickets last May. Having seen him at the same venue for the last three tours, it always sells out and I wasnae going to be taking any chances on being in the audience. Having seen him perform his classics from the three albums, Replicas, The Pleasure Principle and Telekon last year. Although it was a fantastic gig, I was left hungering for his new material. 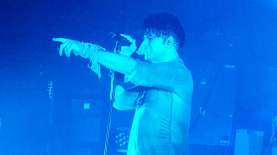 Numan’s most recent offering Savage (Songs From A Broken World). Has received critical and public acclaim, giving him his first top ten album chart placing in over 30 years. So the anticipation for last nights concert was huge. Opening with the first track off of Savage. Ghost Nation. His tight band.shook the venue with a powerful musical onslaught that would pave the way for 90 mins of rock n roll genius.Numans stage sets have always been massive and this was no exception with a backdrop of screens that displayed the dystopian imagery that is the basis of his new work and a light show that was mesmerizing.

Numan and his band had the audience in the palm of his hand, of course, there were firm fan favourites, ME, Metal, I’m An Agent, Down In The Park, Are Friends Electric? And a beefed up rendition of Cars, all given the Savage treatment. But it was his new material that I had paid to see and hear and I wasnae disappointed. The stand out track from the new album, My Name Is Ruin, features backing vocals from Numan’s daughter Persia, although not on stage, the screens displayed her vocal part, the smile that spread across Numans face, was nothing other than that of a proud father, a touching and very human aspect to this example of what makes him and his fantastic band so relevant.

A Five Star Performance that left everyone fulfilled and screaming for more.
Good Time Divinexxx