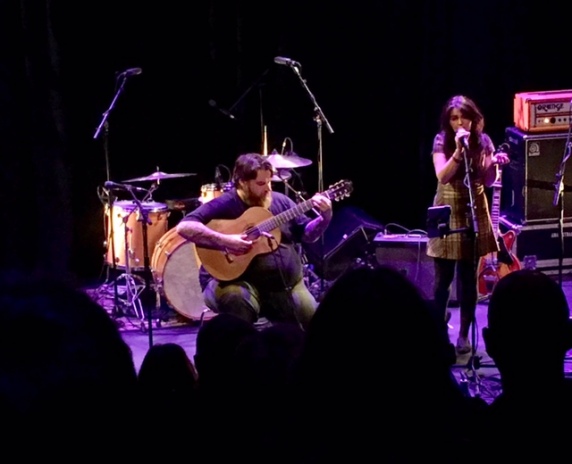 From the ashes of Postcard Records’ second coming until 1995, Glaswegian indie record label Chemikal Underground (CU) has carried the torch for uncovering an adroit mix of lauded Scottish bands including Arab Strap, Mother and the Addicts, Mogwai, Sluts of Trust, and Miaoux Miaoux. Paisley festival The Spree cleverly tapped into this illustrious history earlier in the afternoon by screening the documentary ‘Lost In France’ by Irish director Niall McCann at Paisley Arts Centre; a love letter to Scotland’s independent music scene in the 1990’s. This film was presented at the Arts Centre prior to welcoming CU founding member Emma Pollock of The Delgados and label-mate Robert McArthur Hubbert (Hubby) live on stage later that evening.

Hubby’s candid wisecracking with the audience throughout this set was both engaging and witty, but coexisted with a dark indication of his mental health which one could only show compassion for through applause for being so brave to talk about such issues on stage. Tattooed arms cavorted up and down his acoustic guitar as the last of the autumn insects droned in and out of the stage lights, trying to get a closer look. Playing several songs from last year’s ‘Telling The Trees’ record, the bewitching ‘I Can Hold You Back’ (accompanied by English singer/songwriter Kathryn Williams on the album), Hubby’s comical anecdote about the song being about ‘sneaking into an ex’s home to see if they are shagging anyone’ was slow, tender, and pained.

The vulnerability in Hubby’s phantasmagorical strumming during voiceless songs such as “KAS” and “For Joe” paralleled with his honest tales about the death of his foster-parents, struggles with chronic depression, and marriage breakdown – drifting on the edges of ‘Twin Peaks Theme’ territory in the most elegant and comely way possible. Eyes strictly trained to only gaze at his instrument, Hubby demonstrated how his credible reputation procured masterful names from the Scottish music scene including long-time friend and Franz Ferdinand frontman Alex Kapranos, who produced Hubby’s second record on the CU label. Entitled ‘Thirteen Lost & Found’, the record successfully acquired the Glasweigan guitarist the Scottish Album of the Year award in 2013. Joined for one song by Emma, “Monster In The Park” from the latter’s third solo record ‘In Search of Harperfield’ allowed Hubby to take the backseat and allow the vocalist to shine in front of the Art Centre’s theatre-seated audience, before rounding off a 50-minute set with fan favourite “Car Song” which features Arab Strap frontman Aidan Moffat on vocals on record. Hubby promised a new record with Moffat due for release in Spring 2018, filled with “disco beats and saxophones – but not the type of disco you have fun at”. Already, we cannot wait to hear what the duo have produced.

Approaching two years since the release of ‘In Search of Harperfield’, Emma’s third solo album, the former Delgado’s vocalist was joined by brother-in-law Jamie Savage on keys/guitar, Martin Johnston on drums, and Graeme Smillie on bass guitar/keys. Announcing the Paisley Arts Centre as one of her “most favourite venues”, Emma’s airy and almost-apologetic demeanour helped to relax the audience for the second half, and with the springy-bass sound to songs such as “Don’t Make Me Wait” helped liven proceedings from the onset.

Several times, beg-pardons were made for wires in the wrong place or technical issues, but this was absolutely not ramshackle but rather an amiable feature of a band determined to keep Emma the centre of the attention. The near-insecure lyrics of “Red Orange Green” are swallowed up by a live glam-stomp, and the magical sounds resonating on “Clemency” melt like butter on toast with the gifted story-telling accompanying it. Tic toc drum-sounds and bass-driven guitars on the poppy “In The Company Of The Damned” leave space for the vocals to breathe, with topics drifting towards earlier years of childhood and the death of the singer’s mother just prior to ‘Harperfield’s’ release. “When did you go trading places? Switching roles in little stages”, sings Emma on the heartfelt “Intermission”, explained beforehand as the spell encountered prior to succumbing to death. It’s instantly noticeable that both co-headliners have referred to the loss of their parents and could play a part in why they appear to be such close friends. 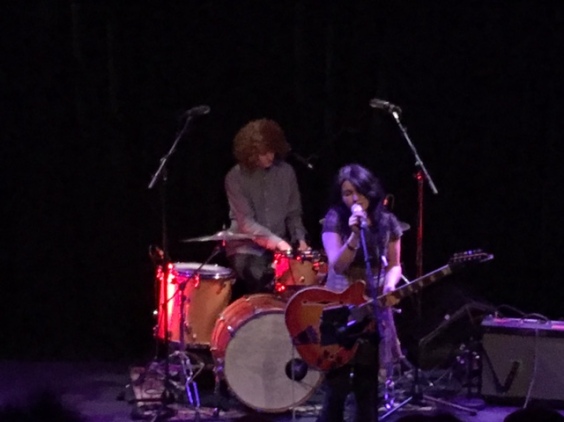 Diversity is key, however. Emma’s first solo hit “Paper and Glue” from 2007 album ‘Watch The Fireworks’ is as innocent as it is uplifting, immediately followed by the brooding, vampirous composition ‘Dark Skies’, all haunting reverb and synth, is a quite cinematic penultimate number. “Old Ghosts” lets the band demonstrate how taut they can be, and allows their frontwoman to demonstrate yet another incredible vocal performance. There was something characteristically-Scottish about this evening; the blend of dark humour, working class mindsets which are ill-at-ease with praise, and a prevalent honesty which is often posted missing in the music industry. This was nothing short of a master stroke by The Spree organisers.