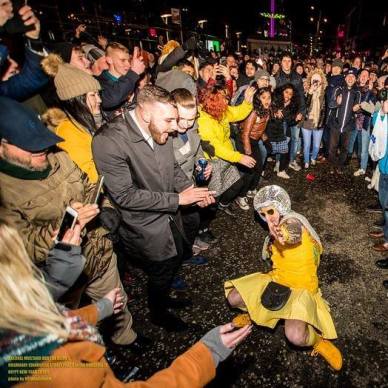 Edinburgh’s Hogmanay is massive and spectacular in many ways, stretching the full mile of Princes St. The Gardens of the East End and the gardens of the Westend. The Bustling market on The Mound. The Waverly Stage, built at the Junction of Cockburn St and Waverly Train station. (Its always been a wind tunnel and it was baltic) The Castle Street stage with massive sound system turning the street into a nightclub with visuals projected onto the walls of the buildings, that was really cool. The East End Stage with an equally punchy sound system. that was to house the very brilliant Colonel Mustard And The Dijon Five.
–
I had arrived early so that I could take it all in, I headed into The Westend Of Princes Street Gardens and the main stage for The Concert In the Gardens, I listened to the sound check of Edinburgh’s own Nina Nesbit.and meditated under a tree. The arena was still empty and the revellers were still to arrive, this was also very cool. I was using my reviewer credentials to full effect. The plan was to see Colonel Mustard And Dijon 5 and then The Human League. Which was the schedule I had been given. I was walking back to Waverly and on one of the big telly’s it said The Human League 10pm on The Waverly stage and Colonel Mustard and The Dijon 5 also at 10pm on The East End Stage. Divine was a torn girl and The Eastend Stage was 3/4 of a mile away from The Waverly Stage I realy really wanted to see both bands. What to do, what to do.
– 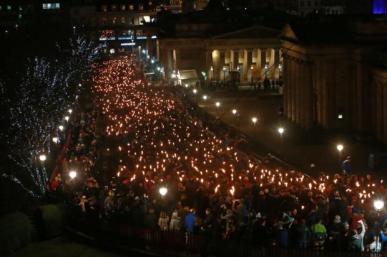 It was cold it was damp, but the sky was clear and the near full Moon bright in The Heavens above shone its Supermoon beauty. The Castle illuminated a lilac glow. A majestic fitting backdrop. But bye eck it was parky. So I made a compromise with myself. Get down to The Waverly Stage and get a good position. The Human League have been in my life since I was about 13. I have always loved electronic music and The Human League were the God fathers of Electro and Phil Oakley influenced my style aesthetically. Making Men look fit in make-up and they are from Yorkshire. So to not have been there would have been just plain rude.
–
The only way to ensure prime position at gigs as well subscribed as this one is to get there an hour before. The Waverly Arena was filling up. So I found my spot and looked at The Clock on the Balmoral Hotel, Bugger. 40 minutes in this wind tunnel. The stage itself with the back blowing free in the wind, revealing the Gothic splendor of Cockburn St. I couldnae help thinking that this was an uncomfortable Gig. I had been on feet for four hours, there was absolutely no where to sit. My old hip was nipping. Luckily I had my big cashmere black dress coat on, so was well cozy with sufficient layers to fend off the deepening chill of the Winter night air.And the only way to warm up was to dance. I looked behind me and 1000’s of people were anticipating the retro boogie that was coming. The minutes soon flew by. And Sacred Paws, a young soulful collective of rhythm and Blues. One could feel how appreciative they were to be playing that stage. Aye Very Very Cool. A lovely warm up. 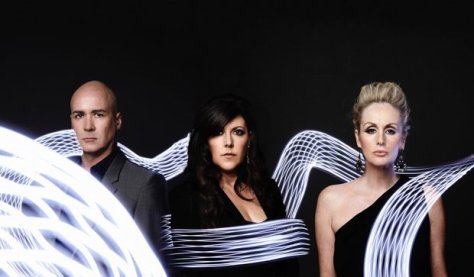 Then the white synths were unveiled, and an excitement rippled through the arena as the keyboard players took position and Love Action was the opening tune. Joanne and Suzanne came on stage wearing skimpy black dress’s. The bitter wind was howling in gusts of ice. I couldn’t help thinking, aye Yorkshire lasses are built of tough stuff. The Audience went mental as Phil took to the stage wearing a plastic man dress, that at once made me think “Is that a good look?” bitchy I know, its a Yorkshire New Romantic thing. The boogie was on. The sound production as on all of the stages was fantastic and there was no soundclash at all. The Human League played a greatest hits set with a nod to Jo Callis who collaborated on the production of Dare and was part of the band at its most celebrated time.He also wrote The Human Leagues best known song. “Don’t You Want Me” It would have been nice to see him on stage with his old band members and he is a Local lad.
I have seen The Human league many times and in places a lot more welcoming than this one. So every tune I knew by heart and so did the audience. Boosting everyone’s spirits. The encore drew me back as I was heading to grab some of The Mustards Debut Hogmanay performance. The opening synth licks of my fave. Being Boiled. I was hooked back in. Groovy boogie. I tore myself away during the last number, Electric Dreams. Which technically isnae a Human league tune. But everyone loves it. 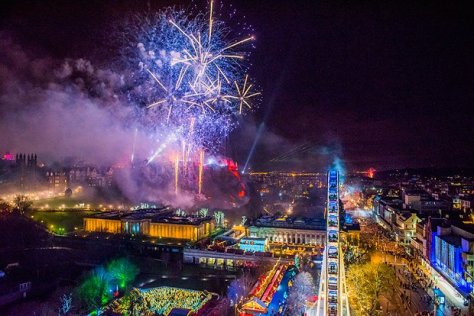 Colonel Mustard & The Dijon 5 are a band that Divine champions most highly having watched them on many occasions. They are mainstays of the festival circuit and for good reason. In Scotland, they have played almost every one going. Eden Festival, Kelburn Garden party, Knockengorroch World Ceilidh, Electric Fields, ButeFest, MugStock, Rockerbie, Deoch an Dorus, Scribblers Picnic, Doune The Rabbit Hole, Jocktoberfest, Linkylea, Stereofunk, Brew At The Bog, XpoNorth, T In The Park, Belladrum Tartan Heart Festival, Party At The Palace, March Into Pitlochry, and Audio Soup have all been sprinkled with their unique brand of anarchic Dijon Mustard mayhem, mirth and merriment. Their talents have even taken them on an epic journey to South Korea to be one of the Zandari Festa highlights in Seoul and, reciprocating the love and affection shown to them on the other side of the globe. they helped two bands from Seoul, Wasted Johnnys and 57, secure gigs and a festival slot in Scotland. 2017 saw them play their biggest audience to date with 9,000 6th Dijons (their fond name for those who come along and support and party with them) at the Belladrum Tartan Heart Festival in August and a trip south of the border to arguably one of the greatest festivals around at Boomtown Fair.
–
Joining them on stage tonight were other rising stars of the Scottish music scene in Mark McGhee (artistic entrepreneur and Girobabies/Jackal Trades frontman), Jay Supa (lead singer of SUPA & Da Kryptonites) and Glasgow based MC David KayceOne. Edinburgh’s Hogmanay was treated to a Scottish super group and, yes, the capacity audience filling out Prince Street from side to side and back to front went mental for it! Will David “Dijancer” Blair go down in history as the only person to “crowdsail” on a Dijunicorn down the East End of Princes Street? We think so!
After Colonel Mustard, I headed to the much more conducive environment, the Party In The Gardens to capture The Rag And Bone Man’s headlining performance. I was lucky enough to have access to the press pit. with space to boogie and prime position for the perfect viewing experience. It was a performance that blew me away. This guys voice is superhuman a bit like the male version of Adele. At Midnight the Fireworks started. The most spectacular firework display and the conditions were perfect for it. A clear night sky with a bright near full Moon. Brilliantly choreographed to the music of The Isle of Skye band. Niteworks. Who composed a fitting House, pumping masterpiece Ear candy and eye candy to the max. And to be directly in front of the Castle in the Gardens. it was nothing less than fantastic. a truly majestic experience. Then the Rag And Bone Man, came back on stage and delighted his audience even more. Bringing to a close a first experience of why this is the biggest and best Street Party in the World.
–
Reviewer : Mark ‘Divine’ Calvert
–