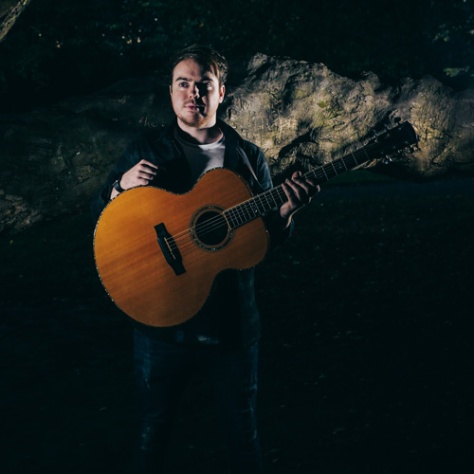 This Friday, the 25th May, young Scottish band Hò-rò’s are releasing their second album, HEX. The Mumble managed to catch a wee blether with the band’s ebbulient guitarist…

Hello Sean, so where are you from & where are you at, geographically speaking?
Sean: Hello! I was born in Inverness, and soon after moved to northern ireland where my da is from in county down. And im now back in Inverness where it all began.

When did you first realise you were musical?
Sean: I think my first memory of being musical was when I was visiting my granny in Mallaig and my uncles had all sorts of instruments lying around. So I started playing with a keyboard that was there. One of my uncles suggested that I stick to all the black notes on the keyboard because it will sound good no matter what you play. funnily enough, I think ive used that mentality throughout my music career.

What instruments do you play?
Sean: I Play guitar Piano and drums .

What for you makes a good song?
Sean: A good song for me is one that can grabs your attention right away. Whether thats with a catchy chorus, Or an infectious instrumental hook. Also, if a song makes the hairs stand up on the back of your neck and you’re not sure why? Id say thats an indication that its a good song.

You’ve spent time making music in LA, can you tell us about it?
Sean: LA was incredible. I was lucky enough to be invited into various studios to soak up as much production knowledge as possible. I always wanted to go over there and explore americas vast music industry. I ended up working with a Pop Duo named Alabama Capital. We worked together on just about everything you could think of. Songwriting, Production, Performance. It was good to be a part of their journey and to watch them grow as artists.

What does Sean Cousins like to do when he’s not being musical?
Sean: My friends often tell me I need to find a hobby! At the moment music takes up all of my time but I wuldn’t have it any other way. Maybe ill eventually get into gardening or train spotting or something.

You are the founding member & guitarist of Hò-rò, can you first tell us what the name means?
Sean: Hò-rò is actually a vocable that has traditionally been used in Gaelic song for hundreds of years. So it doesn’t actually have a meaning as such. Its used to embellish the likes of Waulking songs and Puirt-a-Beul . I suppose its just the same as ad lib that is used in songs written in English such as “OOH’S AH’S and YEAH’s”

And the band’s style of music?
Sean: For me, the bands style of music definitely falls under the Trad/ Celtic Realm. But within that there are elements of just about every genre you can think of. Were constantly experimenting with new sounds and ideas. It keeps things exciting for us and hopefully the listeners too.

Your first album, released in 2016, was extremely successful & highly praised. It seemed to hit a chord with many people, can you explain why?
Sean: Our first album was released after quite a long time of us playing live and touring. So I think there was definitely a bit of anticipation for an album! I think this album in particular struck a chord with a lot of people is because it was very raw and to the point. We wanted it to showcase the talents of each individual band member. But more importantly we wanted the album to reflect what we sound like live. There were elements of everyones playing on the album and of course we threw in a couple of well respected traditional songs too. This seemed to go down well and we are very happy with the outcome.

The band are releasing their next album, HEX, on the 25th May. This time out you’ve expanded into a six piece, who else is in the band & what do they play?
Sean: Yes , as I said earlier we are always experimenting with new sounds and vibes. So we expanded our instrumental lineup. We now have DC Macmillan Playing Drums and Paul Martin on the Keys. Both these guys are incredibly talented and they gelled in with us instantly. They bring a whole new element to our sound and we really enjoy the vibe on stage when playing with them .

Can you tell us about the recording of HEX?
Sean: We recorded the album over on the Isle of Lewis. It was amazing to get away and have a clear mind to work on the album. It was very relaxed and we had a lot of freedom to experiment with different recording techniques and different arrangement ideas that would pop into our heads.

How did you guys choose the songs & how much input did you have at this juncture?
Sean: The song choices on the album were a collective decision. We would each go away and research traditional songs and try and find the right ones for us. I do love this part of an album process. This is where I can really dive into my passion for producing. Constructing a song from the foundations all the way to the finished product. Its a great feeling.

Which song off the album resonates with you the most?
Sean: I guess the song that resonates with me the most Ravens Wing a song written by Barry Kerr. Its such a beautifully well written, poetic song about the struggles of alcoholism. Its one of those songs that so many people can relate to. Its a different approach. Lots of songs are about love and relationships. But to be able to shine a light on a real issue that so many people struggle with daily is pretty special.

What does the rest of 2018 hold in store for Hò-rò?
Sean: We have been working hard on the release of HEX and we will be touring the album throughout the UK and Ireland starting in June which we are very excited for. After that we will be diving head first into the festivals season playing some great festivals throughout Europe.

Hò-rò will be taking the new album on tour in June and July this year;