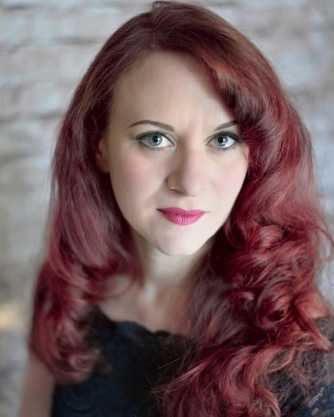 Hello Monica, so where are you from & where are you at, geographically speaking?
Monica: I’m originally from Milan, Italy, but I’ve been a London resident for the past 12 years.

When did you first develop a love of music?
Monica: Strange as it may sound, I was a hardcore heavy metal fan up until I was 16… Then just like that, I switched to a deep love for musical theatre! But until I was 18 years old, I had never considered the possibility of being a performer. I was shy, had never sung a single note in my life, and the only school play I’d done, I hated it so much, that I faked fainting just to be sent home before the start of the performance. Then, my personality, taste, and ultimately life, completely changed thanks to two musicals.  The Rocky Horror Show, which helped me connect to that inner part of me that actually wanted to be on a stage and wanted to be looked at and heard and acknowledged. And the Phantom of the Opera, which helped me to find my voice. At 19, only by singing along the CD, in my room, over and over again, I discovered that I could actually sing… and that I was a soprano!

Where did you train as an actress?
Monica: After the discoveries in the previous answer, I trained for three years in Italy at the Bernstein School of Musical Theatre, in Bologna, which had a great international flavour and style, as its founder is Canadian, and some teachers were American, British… Then, after the diploma, and to pursue my dream of doing musical theatre in London, I got a place on the Royal Academy of Music Postgraduate Musical Theatre Course (I know, it’s a mouthful!). I loved every second of it!

What does Monica Salvi like to do when she’s not performing?
Monica: I love to travel the world, and I’m able to do that a lot and afford it, thanks to the home exchange system. I go to people’s homes while they come to mine. This way, I’ve been in some gorgeous houses for free, in the Canaries, in New York, Canada, all around Europe.. I am also a gong practitioner and sound therapist. I have very big gongs and other therapeutic and shamanic instruments, and I play them while my clients lie on a mat. The powerful sound of the gongs reach deep into people’s souls like no other instrument, and the vibrations are deeply healing on a mental, physical and emotional level. The frequencies of these instruments, and the soundscape of harmonics they create, wash over the subconscious of the client and create a multi-sensorial experience, that can be described as a massage of sound, and it puts the brain into a semi-trance meditative state. It’s a one of a kind experience with many beneficial effects which leaves people pretty in awe, afterwards.

This year you are bringing MAD WOMEN IN MY ATTIC! back to the Fringe, can you tell us about it?
Monica: I took the show to the festival three years ago, when it had some great feedback from both critics and audiences. But, being a perfectionist, I am always trying to improve the show, the script, my performance… Over the past three years, I think it has changed a lot, because I have changed a lot, and also because I occasionally discover new great songs to add to it. I love the Fringe, and I’ve been coming every year for the past 5 years, either as a performer or as a visitor. I thought my updated version of Mad Women in my Attic! deserved a chance to be seen again, and here I am!

Having acclaimed performances in London and the United Solo Festival in New York, having your official off-Broadway debut, winning Best Cabaret Award at the festival with Mad Women In My Attic. Has this level of success emboldened the forthcoming Fringe Performances?
Monica: If I have to be honest, no, it’s unrelated. I’ve always wanted to take the new version of the show back to Ed Fringe, but this is the first year I could afford it! If it was not so expensive I would do this festival every year. It also takes quite a lot of time and energy, which is something not many people are aware of. I’m a self produced performer, and I do everything by myself. Of course I act and sing in the show, but that is a holiday compared to everything else that goes into producing a run at the festival (especially if you are after a certain standard of quality). Since I don’t have an unlimited budget, I do my own PR, I am my own promoter, I take care of marketing and social media, I design all my posters and flyers, research and sometimes make or commission the props and costumes, look for the accommodation for everyone on my team (pianist and stage manager), deal with the venues and the fringe office, and once I’m in Edinburgh I perform not just my own show, but also various slots in other people’s compilation shows. All this requires a huge amount of energy and dedication, which takes up 3/4 of the year (if you are serious about the fringe, you usually start pre-production in January). I do not have the energy and money to do it every year, just every few years! So, catch it while you can!

The subject matter of your work, couldn’t be any more challenging and unique. How much of your work as a sound therapist has informed the writing of the script?
Monica: None, as I wrote my script a few years before I trained as a sound therapist (or even knew what that was).  It’s my acting career which inspired the theme and script of Mad Women in my Attic!.  You know how some people are typecast as the heroine, the mother, the ingenue, the villain.. Well, I was always typecast as a mad woman, or a quirky eccentric character. By studying and preparing for these characters, I started to find common points between me and them, and I figured out that the typical mad character in a story, is just a heightened version of psychological issues that we all have deep within. I started to collect songs about mad women, or with any relation to psychology and psychotherapy, not just from the musical theatre repertoire. Some of these songs are hilarious, like “I need a Stalker”, “The Ballad of Group Therapy”, others are pretty intense and dark, like “Sirens”, “Mam’selle Syphilis”. I also have some well known musical theatre mad women, but I won’t give any spoilers!

When we first saw you perform this show, it was in the Gothic Splendour of St. John’s Episcopal Church on Princes Street, which in my opinion was the perfect venue. This year you have chosen a 15th Century Free Masons Chapel in Riddles court on The Royal Mile. Again a place of mystery and worship. Is this coincidental or is it part of the plan?
Monica: You mean my plan to conquer the world? Mwahahahahaha (evil laughter).
I think it is a coincidence, though it’s never just that is it? I have always been hugely attracted to old ancient buildings, and gothic architecture. The whole of Edinburgh is a treasure trove to me. The choice of the gorgeous St. John’s church, three years ago, happened because I was looking for a venue with a grand piano, and with lots of “nooks” where I could hide during the show, for the costume changes (i.e. the pulpit!). The church was a fantastic space to play in, but it was a bit too light and spacious, and in the end this is a sultry cabaret with a dark theme, despite the comedy moments. So this year I decided to look for a typical black box type of theatre, but I also wanted it to be really central, and in a venue with a nice atmosphere. I had stumbled upon the beautiful Riddle’s Court three years ago, and it immediately intrigued me as it seemed I had entered another dimension.. Outside on the Royal Mile, the madness of the fringe, a few steps inside, peace, silence and no people. I took pictures of it and left. Then, a few months ago, I read that Riddle’s Court would be used as a new venue this year, and that they would build three different theatre spaces in it. I applied, and got the largest space, a 100 seater black box theatre, PQA One.

Are there plans for an album release of your recorded work, featuring songs from the show? (If so we would love a copy)
Monica: No, though I would consider it, if someone offered to produce it, market and distribute it. Having said that, this show is so visual, so “in the moment”, that I feel it would lose a bit of charm as a recorded album.

Are there plans to offer Gong therapy sessions after each performance?
Monica: You know, I had thought about that, but the problem is that the gong set is very heavy and it would be a huge expense to transport it to Edinburgh, also I wouldn’t be able to really carry them around by myself. I already have a heavy suitcase of props and costumes, and honestly I don’t even have space for normal clothes! But of course, who needs those, at the Fringe!

What does the rest of 2018 have in store for Monica Salvi?
Monica: Lots of travelling! Can’t wait to get back to my roamings and adventures, after all the production admin I’ve done in the past few months. And hopefully a few industry people who I invited to see the show, will pick it up and I will be able to do it again!

Mad Women in My Attic! 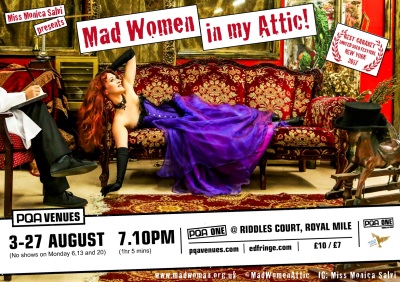