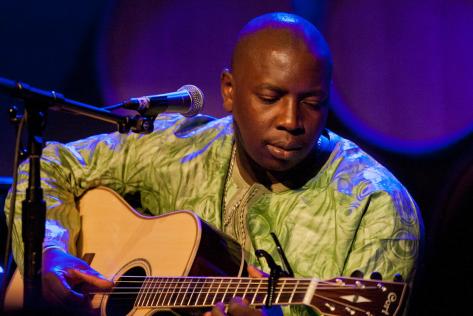 It was a great pleasure to be back at the Paisley Spree’s best venue, the fabulous Spiegel tent. A circular, swirling, special space with a spectacular stage surrounded by mirrors (hence the name), and with a great view from any perspective. The stage was set with instruments standing ready to be played, making the period of suspense as we waited for the music to start all the more potent.

Callum Ingram is a Paisley born musician trained on the cello and is known for mixing a wide variety of musical genres. Sitting down with his electric cello, he took the room by storm with highly charged vocals, the lyrics and melody strongly influenced by blues tradition. But his talent far extends beyond just one simple musical genre, including at one point a sound similar to the sitar. Having got us in the mood quite beautifully, his music introduced the main act for the evening with passion and a great deal of enthusiasm – Vieux Farka Toure from Mali, often referred to as the ‘Hendrix of the Sahara.’

Vieux sat down with a guitar and a mic and proved instantly that power in music does not always come with numbers. In fact, his musical grace somehow pulled us in to a far greater degree than more lively music could have. As he began to sing in sync with his guitar, I found myself listening to music that I had only ever heard in recordings, and like everyone in the room, was mesmerised and filled with awe and respect. His African lyrics brought a style with them that his melodies translated into something that was free for all to understand. This performance was pure, joyful entertainment.

We could hear multiple genres in each of his masterful nuances. Entwining them and using them to tell stories the highs and lows of his life experiences, understood in the universality of music. There was something pure and wise streaming from his fingers as they moved up and down the neck of his guitar. Later, he brought Calum back on stage and the two musicians jammed together, blending their instruments in a masterly way to fill the space with ever more intriguing melodies and new musical insights. They smiled in appreciation of each other’s skill.

It was wonderful to walk into that famous tent to a warm welcome and an enticing evening; to be surrounded by music at its most meaningful and universal; to be glued to your seat by the sheer virtuosity on display. If you ever get the chance to go and see Vieux or Callum live, take it, you won’t regret it.