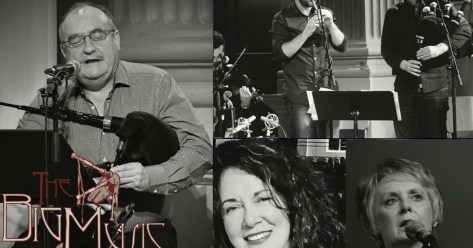 The audience which came in from the Maryhill snow to the purple-lit Mackintosh Church soon realised they had entered a very special world. Pìobaireachd, Ceòl Mòr, the ‘Big Music’ is the classical music of the pipes and is like an independent state within a world. Define classical music anyone? Ask Alan MacDonald, really funny as well as knowledgeable in his introductions. According to him classical music ‘raises great expectations that a tune might break out.’ Pìobaireachd music starts with the measured statement of a tune, then repeats it with increasingly complex embellishments and variations before returning to it at the end. In the past the performance of this music has been rather constrained by convention, but Alan has done a great deal to bring it to life, and to contemporary audiences, as have the Big Music Society. In retrospect it was perhaps a shame that we didn’t hear a complete solo pibroch in the fantastic acoustics of the Mackintosh church. But the arrangements were substantial and mostly worked marvellously. One of the most effective was ‘Gabhaidh sinn an Rathad Mor’ a tune which has certainly been about a bit, and which progressed in good style to a grand conclusion, seeming to pick up both the Penguin Café Orchestra and the Vatersay Boys along the way. And if there is anything more exciting than the sound of the pipes, it is the sound of the pipes deferred, so that halfway through a tune you were already enjoying, comes the sight of a couple of guys hoisting the pipes on their shoulders and blowing up the bags in preparation, so you realise everything is about to go up a significant gear. Marvellous stuff, and with a double bass adding just enough to the foundations to support the whole musical structure.

The concert was called ‘Seinn (Sing) air a’ Phìob’ because in Gaelic pipers sing on their pipes. Singing and piping are inextricably linked and indeed singing ran throughout the concert, with the piping coming mostly in the second half. In the first half Maighread Stewart and Ingrid Henderson gave a stunning set of songs and solos with voice and harp. What a partnership they are with the harp sounding so refreshing and colourful you could almost taste it. In general, for me it was in the singing that the greatest highlights were to be found. The song about Deirdre of the Sorrows, the first song in praise of whisky, and in the second half the charismatic singing of Alan Macdonald stood out memorably. Not only were the audience treated to Maighread and Alan’s singing, Mairi MacInnes was there, and her rendition of Maol Donn was unforgettable. Then Kathleen MacInnes appeared as a surprise guest, bringing her soulful impact into the world of the concert. I enjoyed it all and, indeed, if I had to go to exactly the same thing tomorrow I most certainly would. Calum MacCrimmon and John Mulhearn deserve great praise for initiating and, more importantly, growing and maintaining the Big Music Society, making the event what it was. Long may it, and they, flourish.

Neil Sturgeon and the Informaniacs / The Jackal IV / The Reverse Cowgirls