Continuing Damian Beeson Bullen’s retrospective adventure thro’ the Birth of Britpop; with the Brixton Anti-Nazi League Rally & a trip to Wembley to see Burnley FC win the play-offs… on the same bloody weekend!

After meeting the Stone Roses, once me & Nicky were back in little Ynysddu our appetite had been seriously whetted for all this music malarkey, & it wouldn’t be long before we were back on the road again. As it happens, we were just chillin’ with a reefer listening to a bit of Bjork when Lisa bobbed in & told us there was gonna be a big gig in Brixton…

“Manics… Levellers… Billy Bragg… a few others. There’s a few coaches leavin from Blackwood… three quid there & back!”

She left & then Nick said,

“Fuckin hell, Burnley are playin at Wembley next day!”

It had all seemd to miraculousy fit together – we could get to London for £3, watch a gig, & see Burnley get promoted (hopefully) in the old Third Division play offs. So the next day we got up at some stupidly early time & found ourselves waiting at Blackwood bus station with a load of festival types. One of them was the original manager of the Manic Street Preachers. He was a bit slow, like someone who’s not quite nappy-trained when everyone else was using potties. It turns out the Manics had dropped him in a flash just as success was looming. I was never really a fan of the band, like, a bit too buzz-saw grungey, banshee wailey for me. 1994 was the year of their third album, ‘The Holy Bible,’ whose first single, Faster, was released on June 6th, lyrics by the missing-within-a-year Richey Edwards.

After paying our £3 fare we began to trundle East toward the big smoke… London, England. From Piccadily to  Portobello Road, from Peckham to Primrose hill, from Portland Place to Putney & from Paddington to Penge the place is pretty pukka! The capital is a totally bonkers… far too many people, far too expensive & far too big. But there’s loads of stuff to see & do & the tubes were pretty easy to jump back in 1994; there were hardly any electric gates, & if there were you just shimmied on your knees through the luggage bit. 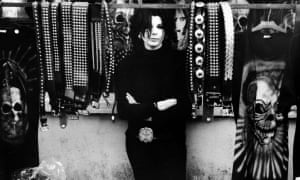 In 1994 the Mecca for all young people was Camden Town & its mental market; shop after shop of funky clothes blaring out funikier tunes spread out round some wicked little venues. Unfortunately, me & Nick were a couple of years later for the legendary squatting of the Roundhouse by the Spiral tribe & its Mad-Max raves. By 1994, however, the place was becoming the new home of Britpop, thanks to spunky young band of pearly princes called Blur who lived in the area. Their eternal disco-classic, Girls n Boys & its ridiculously brilliant bass line had just reached the top ten back in March.

A few weeks later, on the 25th April, they took the whole country down the Poplar dogs with the anthemically Cockney album, the bastion of Britishness that is Park Life. A ‘nocturnal travelogue for london,’ chirp’d singer Damon Albarn, & the album – part mod, part punk, part pure art, & peppered with sunspots –  would capture the London zeitgeist with all its apples & pears & gorblimeyisms; which remains, to this day, a modern classic.

Meanwhile 2,000 Blur fans are spilling onto the street as suave bastard Albarn, mad axeman Coxon, cool f***er James & soon-to-be groom Rowntree head for a hard day’s night of outrageous debauchery & wanton hedonsim ‘Im up for it,’ says Damon as I leave him with three diminuitive Blurettes hanging from his neck live living breathing pendants. ‘Whatever is it, I’m up for it.’
NME Journalist after the Wolverhampton gig

Other albums released by pre-Brit Pop bands in early 1994 – all in March actually – included ‘Give Out But Don’t Give Up’ by Primal Scream, which unfortunately after Screamadelica was a bit retro rocky rubbish really. ‘Devil Hopping‘ by the Inspiral Carpets was weak, while ‘Up To Our Hips’ by the Charlatans was also lacking brilliance. One to Another and that Area 51 jam, tho, they were bangin tracks. Still, it was going to be up to a wave of new bands to define the Britpop sound; Blur’s ressurection & reinvention after being slain by the Seattle conquest, while the growing acclaim surrounding Pulp’s His & Hers album (released April ’94) would lead to the following year’s world shattering ‘Different Class.‘ It had taken Jarvis Cocker & co. eleven years to get there, but their sound & songwriting were finally clicking together. Echobelly & Sleeper were also redefining themselves for the epoch, giving us the leading ladies of the Britpop Olympus. “Any generation that would pick Kurt or me as its spokeman,” said Eddie Vedder in ’94, “that generation must be really fucked up.” They probably were, but the British didn’t care anymore – they were ready for a change & it had already fuckin’ started!

Oh yeah, Blur & Suede. I do believe we’ve got ourselves a Happy Mondays vs Stone Roses/Beatles vs Stones-type face-off in the making. This has to be encouraged. It is, indeed, exactly the kind of healthy competition that inspired Brian Wilson to outdo Paul McArtney in the Sixties, Bowie to outglam Ferry in the Seventiues & Morrissey to outwhinge Edwyn Collins in the Eighties… There’s also tremendous gossip-coloumn potential in all this, what with Damon living with Brett’s ex, Justine, & Suede, Blur & elastica vying for magazine & ‘TOTP’ space. Its the drama of the season, watch this space. Paul Lester

Back on the bus with a load of South Welsh, after a few hours of hashish & hip-hop we finally arrived in Brixton, parking up with what seemed like thousands of other buses. They had all arrived from different parts of the country, emptying their contents to form a mash-up of well over a hundred thousand folk – the biggest crowd I’d ever been a part of. Once in Brockwell Park. the ‘show’ was started by a couple of speakers, who came on & ranted a while about the BNP, whipping the crowd into a phrenzy.

Said Nick, & I agreed. Our prayers were suddenly answered & on came the Levellers, & out came the spliffs, & the crusty hippies began to wave their dreadlocks around furiously to the music whilst dancing like they were having an epileptic fit. Next up were the Manic Street Preachers (with a new manager) & finally Billy Brag did a solo rendition of his brilliant New England, which went down a treat.

The Anti-Nazi League rally of 1994 had its roots in the first Carnival Against The Nazis, which was played by X-Ray Spex, Steel Pulse, the Tom Robinson Band and The Clash in 1978 – a diverse selection of music for a diverse multi-cultural crowd. A huge rally of 100,000 people marched the six miles from Trafalgar Square through London’s East End – the heart of National Front territory – to a Rock Against Racism concert in Victoria Park, Hackney. With the relaunch of the Anti-Nazi League in 1992, a nationwide live musical movement rose up which culminated in over 150,000 arriving at Brockwell Park to celebrating the defeat of the Nazis in the recent local elections & reaffirm their belief in a multicultural society. Of the growing rise of Neonazism, ‘they have an illness in the minds,’ said Stero MCS frontman Rob Birch, ‘they’re ill people.’

Other bands that played were Back To The Planet, Credit To The Nation, Urban Species & African Head Charge, but the definitive highlight of the show were Rage Against the Machine, who got 120,000 people jumping in unison singing,

“Fuck you I wont do what you tell me!”

All around the crowd, the neon-clad metropolitan police began to get edgy, & it looked for a moment they were gonna pile in & kick off a new set of Brixton riots. But it all passed off peacefully & suddenly it was time to go home. People began to wander back to their coaches, but we were off to Peckham to see some family of mine. For a moment we completely lost each other in the merry mass of people, but after ten minutes of frantic searching I saw Nick’s yellow t-shirt come bobbin down the hill & all was well.

The next day, despite only having ten pounds and a bit of shrapnel left between us, we jumped tubes into Central London. I’d had a brief stint in London in 1992, as a 16 year-old staying on the largely intimidating North Peckham Estate overlooking Burgess Park. In the three months or so I was in the capital I’d learnt the laws of the jungle; skiving college, jumping trains about the city & going shopliftin’ & stuff – it was an alternate education. At one point I remember going into a record store & discovering the very earliest release by The Stone Roses, the punky So Young. I listened to it on one of those old listening booths from the 60s, & it was a special moment discovering ‘new’ Roses music. The track would be eventually released on The Complete Stone Roses compendium of 1995. But that rainy afternoon in the capital a precedent had been set for grailhunting the Roses.

Two years later I wanted to show Nicky the Trocadero centre & the proper arcades, where we had a wee two-player go on the mental Windjammer. It was a an old hang-out of mine, the Trocadero, & for useful information lovers, in 1994 Nickelodeon UK began broadcasting live from there in a two year stint before moving to Rathbone Place.

So, it was time to get to Wembley, where we arrived at the stadium – the old one with the towers – at a few minutes minutes after three. The match had already kicked off & unbeknownst to us Stockport County had scored. Now Burnley versus Stockport might not sound exactly like a glamour-match – but to a Burnley fan who’d spent all his conscious life watching them in the lower echelons of the football league, this play-off final was the biggest match of his life. Luckily for me & Nick we stumbled across a sound steward, who took our sneaky tenner & led us right up to the executive boxes for a panoramic view of the action – with a programme thrown in for good measure.

I had been to Wembley once before, as a wide-eyed kid back in ’88 to see Burnley play Wolves in the Sherpa Van Trophy. I distinctly remember Wolves fans mooning us on the motorway after the game. I also remember there being more fans for the meeting of two 4th division teams at Wembley that year than the Liverpool-Wimbledon FA Cup Final, with 80,000 filling the stadium. On this occasion, there was still 35,000 Clarets, but only 8,000 or so County fans, with huge swathes of the ground left empty.

Football in the analogue era was so different by the way. Away from radio updates, watching the Ceefax/Teletext screens change every 30 seconds or so in an exciting carousel was the only way to keep up to date with events across the board. In those days as well, people played fantasy football & football manager games by post – I played one where I did a whole season per post, which was cool. Players were off the radar completely – no hourly twitterfeeds or instagrams, just names in old programmes & photos in your panini album. 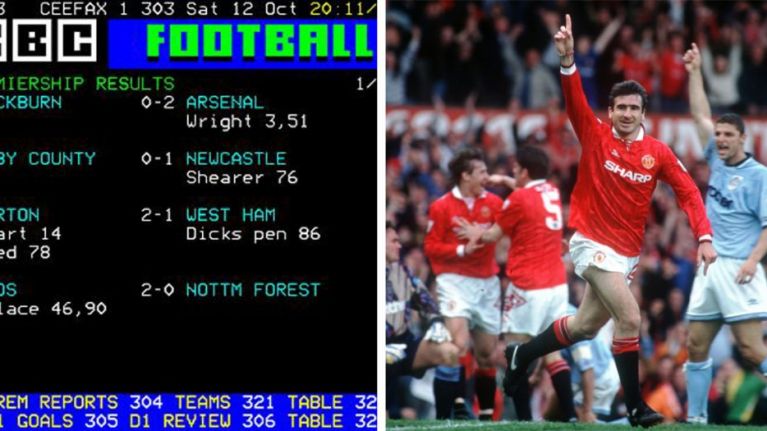 As the gplay-off final continued, Stockport got two players sent off – Wallace for a disgusting spit in the face of Burnley wing man McMinn, and Stockport goalscorer Beaumont for an off-the-ball stamp on Burnley pie man Les Thompson. We soon enough scored a couple of goals & I didn’t give a shit any more about the quiet atmosphere & the rows of plastic seats across the way. Despite finishing 12 points behind Stockport in the league, Burnley were promoted & Wembley was the greatest place on Earth. The chant, ”Jimmy Mullen’s Claret Blue Army’ was the loudest ever surge of pride sang by the Turf Moor faithful to this day. Marlon Beresford, Gary Parkinson, Les Thompson, Steve Davis, John Pender, Warren Joyce, Ted McMinn, Adrian Heath, John Francis, & David Eyres – we will always love you!

1: THE MURDER OF KURT COBAIN