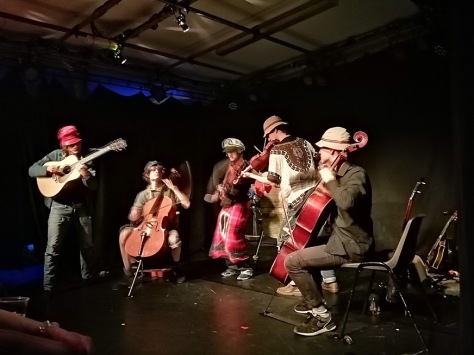 Way, way, way back at the start of the Fringe, I’d been invited along to the C Venues Press launch. By far the most entertainingly intriguing of the assembled performers were Fiddlers on the Ramp – booming youth, talent & whirls as they pounded & hack’d away at their cello & violins. I just had to go & see their full show, being forced to wait three whole weeks until they graced the Edinburgh stage. Like the rest of the extremely healthy crowd who eventually packed into C Aquila, who would soon be bearing witness to the most special of spectacles.

What I got in the end was wild – a mixture of badly-acted student theatre & excuisite musicianship, all loosely based on a pirate’s adventure & a devil-given golden cello. The costumes were fantastic, the shanties were banging, & its all just a waterfall of wonders. These five fine & feisty fellows offer a gonzo gala of foot-stomping, thigh-jiving avant garde hyperjazzy hillbilly hijinks. Like the ten arms of the kraken they ripple & roll into the room, stroking & probing our pleasure-receptors until the supernova of nonsense at the end. Aye, Fiddlers on the Ramp is a beauty!

Outstanding and Astonishing! Aquapella was created many moons ago and consists purely of 13 Edinburgh students all studying various subjects. Gifted with a natural singing voice, each member has crafted the art of sonic control and physical movement, bringing “Aquapella” to Edinburgh Fringe for our enjoyment. As the auditorium fills up there is barely a seat left to occupy. The excitment in the atmosphere sticks to you like the clammy, muggy Scottish weather. As the lights dim, the room goes quie,t the sound of angelic voices echo through the silent air. Like a chorus of tropical birds singing in harmony you are elevated to a musical level like no other. The power and purity of the human voice is evident to see when these 13 soulful singers come together.

With continuous changes and rotation of members with every semester, this must bring a different challenge each year – but looking at the craftmanship and dedication it appears to work. Aquapella has dicovered the secret of togetherness. This show is well-chiseled and synchronised, not just through voice and dance but also through unity. With time going quicker than Usain Bolt running from a lion, Aquapella slides into classic songs such as Lovely Day, Kool and the Gang’s ‘Get Down On It’ and Like a Prayer by Madonna. Asking the audience what they may wish to hear, Another One Bites the Dust by Queen is soon circling the room. Aquapella appeals to all ages, from heart-warming Celtic folk sounds, to a church choir you are pleasantly entertained. Lavishing the audience with Hip Hop, Funk & Soul, Rock and Pop the energy is intoxicating. A jaw-dropping preformance with an endearing approach to music. Beautiful, comforting and moving this is the creative result of music at its best. No instruments, no backing tracks , just the voice. Magnificent, well choreographed and executed with precision Aquapella is a must see. 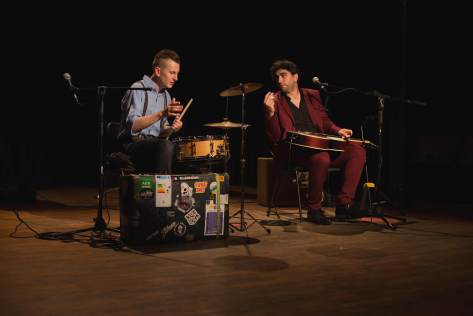 “Let’s boogie!” Two new boys have arrived on the Edinburgh August scene, bringing a fresh way to worship the Fringe experience: bangin’ blues & a whisky tasting – they are like the perfect bedfellows, right? The Rhythm and Booze Project are London based; a Scotsman (Paul) & an American (Felipe), so they will know their whisky, & they clearly know their blues, such was the assorted selection of numbers brought to life with foot-stomping vigour by Paul’s passionate, blissed-out percussion & Felipe’s sublime slide guitar burnis’d by his feverish voice.

Inbetween songs, three different drams were brought out on trays out by a smiling team, alongside water in pipettes to ease the throatburners. The setting was Venue 45, a converted church which seemed apt, as Felipe so ably told us, for it was Irish monks who first brought the art of distillery to Scotland. This was just one of a series of erudite nuggets from the soft-spoken, hard-singing, Felipe, for one of the main aspects of their show is to teach is enough pretentious ‘bullshit’ to blag our way through highbrow whiskey, aroma detecting, vapour sniffing circles.

After a couple drams I get better, after a few more I get worse but I think I get better Paul Read the full interview…

As the whisky kicked in – one was 65 percent –  things just got better & better, the whoops got louder & the playing got slicker – Paul’s silver string’d flingers sliding up a washboard is a phenomenon! As we heard tunes like the Chicago classic ‘Spoonful’ & John Lee Hooker’s ‘Boom Boom,’ I loved watching a group of gawping middle-aged men sat like teenage groupies nearest our musicians, completely awe-struck by the show. This, by the way, provided the most euphoric experience I have ever had at the Fringe. I am a musician myself, & I’m currently having a fallow period, but seeing The Rhythm and Booze Project strut their stuff is a sheer inspiration… now where’s mah gee-tah?