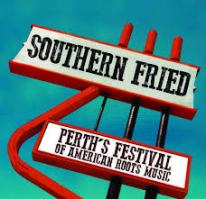 –
I would like to apologize in advance to the organizers of the Southern Fried Festival for this review. When I heard Low were playing at Perth concert Hall I jumped at the chance. Expecting it to be the seminal sub-pop miserabalist duo. Unfortunately about a week before the gig I learned it was in fact Nick Lowe and a couple of his mates going deceptively under the name Low. I don’t really know an awful lot about Nick Lowe other than he’s a white haired cockney bloke who frequently turns up on BBC4 documentaries about rock and roll. Usually to inform us for the 56th time that skiffle was like the first punk and we wouldn’t have British rock and roll without it. Thank you Nick. However, to save face and because, after all, a free ticket is a free ticket, I took the ticket.  When the day of the gig came I realized I had made another small oversight. How was I going to get back from Perth without spending a fortune on the train? The last bus was at 8.55pm which gave me an hour of Nick before I had to dash to the bus stop. But hey, that should be just enough time to get a review out of it, shouldn’t it? Given there was no support act.
–

–
After a pleasant two hour trundle through the Fife countryside I arrived in Perth with 20 minutes to get to the venue. After a number of particularly unhelpful encounters with some less than accommodating locals I finally got some directions off a friendly bar owner. Who needs Google maps? Within 15 minutes I was among a sea of white hair not unlike that which sported Nick Lowe’s own barnet. Skepticism instantly took hold. With so many Brexit voters in one place think of all the good I could do! My genocidal ponderings were soon assuaged by the infuriating announcement that there was indeed a support act. Straight out of Austin, Texas, the new first couple in country, Bruce Robison and Kelly Willis were here to entertain you for an hour. Well that’s that buggered then! I had no choice but to sit down, strap in and hope Southern Fried would not lynch me for neglect of duty. But let’s face it, the venue sold out anyway and what difference is one good review going to make to an already fiercely loyal Nick Lowe fan base? So I’m sorry Southern Fried but in the interest of playing fair I’ve reserved the rest of my “review” for the couple who probably need a lot more British support than Nick and his crew – Bruce Robison and Kelly Willis.
–
Now I’m not a great fan of country music. Other than some Jonny Cash and a few dabblings with the 1 pound Woolworths tape bucket as a youngling I have limited knowledge and appreciation of it’s stylings. I do, however, have a superficial appreciation that it is at the routes of much of the rock music we love today. And it is in illustrating these routes that Bruce and Kelly truly shone. Beautifully constructed, deceptively simple melodies that never went quite where you expected but always felt familiar. Coupled with tight, evocative harmonies which expressed all the simple heartaches of a down home country boy and girl. Their banter could be a little hokey and they were hardly breaking new ground but the sheer faultless craftsmanship and earnestness of both their songs, in particular Kelly Willis’s, couldn’t help but bring a tear to even the most hardened reviewers eyes. Who needs suicidal seatalites when a couple a’ honest true blue texas folk can shine just as bright in the darkness?
–
–
Feeling fully elevated by the music I was more than ready to take on Nick Lowe and his cronies but unfortunately I had a bus to catch. Which didn’t exist. I’d read the timetable wrong. Bugger. Thankfully I just managed to catch the last train, which I managed to get all the way back to Edinburgh for free. Riding the railroads for real! Maybe there was a little bit of cowboy in me after all…
—
Review by Steven Vickers

One thought on “Bruce Robison and Kelly Willis”