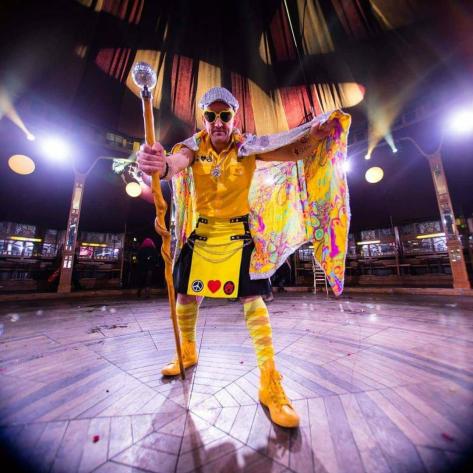 Across Scotland this Summer, the words PEACE, LOVE, & MUSTARD will be utter’d over a million times. About 100,000 of these will come from the bouncy lips of Mr David John Blair, the iconic Dijancer of the equally iconic Colonel Mustard & the Dijon 5. The Mumble managed to catch a wee blether with the laddie, & thoroughly enjoy’d the experience…

So David, nice to meet ya, can you tell us where you’re from and where you’re at, geographically speaking?
Yo D! I’m (made) from the recycled atoms of collapsing stars. At One with the Cosmos. Geographically on this third rock from the Sun; a wee village called Chryston, North Lanarkshire, Alba.

What’s the best photo of baby David you possess, and can we see it?
I’ll need to ask me maw for that… take yer pick!

We’ll use both. So, as far as the Scottish cool list goes you’re pretty near the top. Have you always been cool or were you a late developer?
Ha! Cheers bro 😉 I find the concept of being “cool” a weird one. I’m just doing my thing and trying to help folk along the way and enjoy myself as well. Spreading a wee bit of peace, love and Mustard wherever I go. I like using the word ‘cool’ but I’ve always had an outsiders non-conformist attitude and a Timothy Leary approach to life i.e. THINK FOR YOURSELF. QUESTION AUTHORITY. I love the 60s and am heavily influenced and inspired by that decade through The Beatles, The Doors, The Rolling Stones, The Who, Pink Floyd, Led Zeppelin, Andy Warhol and The Velvet Underground; The Monkees, blah, blah, blah and the whole hippy and flower power counter-cultrure movement spearheaded by legends like Robert Anton Wilson, Terence McKenna, Alan Watts et al. As one of my hero’s, John Lennon, once said, “If someone thinks that love and peace is a cliche that must have been left behind in the Sixties, that’s his problem. Love and peace are eternal.” In 2015 I was in Perú to do an ayahuasca ceremony with Quechuan shamans in the Sacred Valley outside Cusco in the foothills of the Andes. When I met Pachamama during that She (“God” is obviously a She) showed me my past lives so in terms of development I think I’ve been kicking about as some form of energy neither creating or destroying but changing form for a good 13 billion years ha! Or, I could be wrong about that and it was just a phenomenal trip! Guess you’d need to try it yourself for experiential evidence to corroborate or refute my “story”. I have known Colonel John Thomas McMustard (Colonel Mustard & The Dijon 5 frontman) since we were 5 (he was just John back then) from starting Primary 1 together so maybe we’ve been hatching plans for the Dijonverse since then. Maybe. I’m sworn to secrecy on that one until we both synchronously touch the ancient megalithic standing stones outside Dijon in France and then we can reveal The Truth!

Tasty. So David, where the fuck did you learn to dance like that?
Under 18’s raves, over 18’s raves, watching Keith Flint and Leeroy Thornhill from the Prodigy and umpteen B-Boys and B-Girls and Alan Partridge dancing to Kate Bush and ABBA medleys.

As an integral member of the Mustard Gang you can often be seen surfing the crowd in an inflatable dinghy, wearing a crash helmet. Have you ever fallen off?
Yes! A few times. But like a metaphor for life; it can sometimes get you down. But when you look around, you realise that you have a lot of support around you when you need help who can lift you back up and help you reach your highest potential. We all get by with a little help from our friends.

The first time I saw your band was at Kelburn on a sunny afternoon a few years ago. I said to myself at the time you were a great outfit, and in the interim it seems everyone else in at least Scotland has caught on. Can you describe the rising of the Mustard star?
We’ve been playing live. A LOT. About 100 gigs (50 festivals) across Scotland, Ireland, England and South Korea in the last three and a half years. The legion of 6th Dijons (our affectionate name for our loyal following) has grown after every gig and festival.From a capacity 1,900 at our Yellowland Barras gig in March 2016 with our Yellow Movement brothers and sisters The Girobabies, Jamie & Shoony, Have Mercy Las Vegas and The Twistettes; to be voted the highlight of Zandari Festa in Seoul, South Korea in October 2016 to 9,000 watching us at the Garden (main) Stage at Belladrum Tartan Heart Festival last year, the support just keeps on growing! It’s been incredible and word of mouth adds to that. We all want to have a laugh and enjoy ourselves when we go out and what better way to soundtrack our ‘Peace, Love & Mustard’ than with the power of music!

So how did the name come about?
The name Colonel Mustard & The Dijon 5 was gifted to the Colonel, when he was just John, at the Glastonbury Stone Circle by a shaman from Dijon in 1997. It was prophesised. John had already mentally formed the band then manifested us into the physical realm earlier this decade. It was an idea whose time had come.

Right… So, what does David Blair like to do when he’s not being musical?
Activism, reading, running, yoga, meditating, avoiding the mundane, plotting how to overthrow the Tories.

What are your favorite Mustard songs to listen to, and your favorites to dance to?
To listen to would be ‘These Are Not The Drugs (You Are Looking For)’. Lyrically it’s a journey and asks a lot of questions about drug use and it’s effects and how we treat it and those who it affects. I particularly love the masked frontman from Mickey 9s, St Cool’s, contribution; “”(Health giving or medicinal properties, Partake to intake for love’s sake of a pair of E’s, The woes of the world caused by hate are all laid at ease, The eyes of your friends will be blessed to remember these, It’s not about the method but about what you love more, The ego of your self or your compassionate core, It’s the key to perception will you open up the door, These are the fucking drugs that I’m looking for…” And ‘Peace, Love & Mustard’ because that’s our mantra.
To dance to would be ‘Dance Off’. Getting a circle at the front and having a dance battle with The 6th Dijon always throws up some interesting shapes. It’s not about who has the best moves, it’s all about feeling free to express yourself and dancing like no one’s watching.

Cool! So where will the Yellow Juggernaut be rolling to this summer?
May is BIG music industry showcase month for us. First up is FOCUS Wales in Wrexham with international delegates from BreakOut West in Canada to Australian Music Week. Two countries I would LOVE to spread the peace, love and Mustard in! Then we’re playing The Great Escape and five days in Brighton! We’re part of the Creative Scotland Scottish Showcase with some of the best talent up here right now. One’s to watch are Declan Welsh & The Decadent West. Like a cross between Mark E Smith and The Fall with the political leanings of Billy Bragg and societal observations of John Lennon in his solo years and with the musicality of Arctic Monkeys. Then we have, deep breath, FyneFest, Enjoy Music Festival, Eden Festival, Cream o’ the Croft, two weeks in Korea as International Peace Ambassadors to play the inaugural DMZ Peace Train Music Festival between the North and South, North East Chilli Fest, Audio Soup, MugStock, Belladrum Tartan Heart Festival, Party at the Palace, Edinburgh Fringe Festival, Lindisfarne Festival and… Live@Troon! I think that’ll be the end of festival season for another year!

Busy, busy, busy… Who are the organisational maestros behind such an intense itinerary?
The Dijon spreadsheet takes an absolute hammering ha! We all chip in. We have also thankfully been working with our booking agent, Antidote Booking, since the tail end of last year. I would personally like to thank them for everything they have done and for all the help they’ve given us. I used to manage and organise a lot of our bookings and it was driving me insane ha! Some might say I always have been but in the immortal words of Alice (in Wonderland), “I’m afraid so. You’re entirely bonkers. But I’ll tell you a secret. All the best people are.”

So David, for any future converts to the cause, what does it take to become one of the 6th Dijon?
To become one of The 6th Dijon is easy. You just need a desire to be a part of a music loving community that comes together to be as One. Looking after one another in celebrating the live music experience and having a party with hearts and minds full of peace, love and Mustard. You may say we’re dreamers, but we’re not the only ones. One Love. 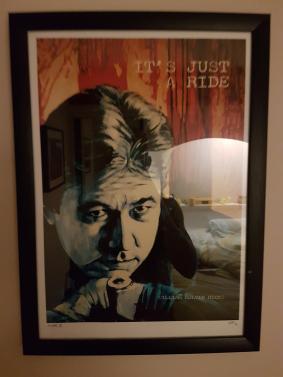 The final question comes from the wife, who loves you! She wants to know what do you think of first thing in the morning?
I wake up every morning (when I’m home) and look at this amazing painting in my bedroom of one of my all time heroes by the incredible Glasgow based artist Marcus Raynal Hislop (The Notorious Gasoline Company)… The comedian and philosopher, Bill Hicks. He entertained and educated me as much as The Beatles, John Lennon and Rage Against The Machine. That line, “It’s just a ride.” comes from my favourite quote of his and is well worth sharing with your readers and memorizing…

The world is like a ride in an amusement park, and when you choose to go on it you think it’s real because that’s how powerful our minds are. The ride goes up and down, around and around, it has thrills and chills, and it’s very brightly coloured, and it’s very loud, and it’s fun, for a while. Many people have been on the ride a long time, and they begin to wonder, “Hey, is this real, or is this just a ride?” And other people have remembered, and they come back to us and say, “Hey, don’t worry; don’t be afraid, ever, because… this is just a ride.” And we … kill those people! “Shut him up! I’ve got a lot invested in this ride, shut him up! Look at my furrows of worry, look at my big bank account, and my family. This HAS to be real.” But, it’s just a ride. And we always kill the good guys who try and tell us that, you ever notice that? And let the demons run amok. But, it doesn’t matter because, it’s just a ride. And we can change it any time we want. It’s only a choice. No effort, no work, no job, no savings of money. Just a simple choice, right now, between fear and love. The eyes of fear want you to put bigger locks on your doors, buy guns, close yourself off. The eyes of love instead see all of us as One. Here’s what we can do to change the world, right now, to a better ride. Take all that money we spend on weapons and ‘defence” each year and instead spend it feeding and clothing and educating the poor of the world, which it would pay for many times over, not one human being excluded, and we could explore space, together, both inner and outer, forever, in peace.”

Connect with David & the Dijon 5 @ 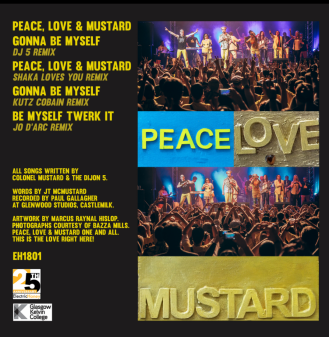